The California coho salmon, a magnificent fish that was all but wiped out during the 1990s, have begun to trickle back to the rain-swollen Russian River and its tributaries. 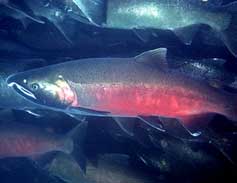 “When it starts to rain, it somehow clicks in them that it’s time — that they can get through to their spawning waters,” says Harry Morse, communications official of the California Department of Fish and Game.

The Russian River coho salmon population faced near-extinction in 2000, he said, for reasons that are still debated. In their heyday, the size of the coho fishery off the Sonoma Coast was 200,000 to 500,000 fish in the 1940s. By 2000 the number of salmon shrank to one percent of that, and the fish was listed as a threatened species.

“Why they disappeared is the $64,000 question,” Morse said in a telephone interview.

He acknowledged that in some coastal fisheries, habitat damage caused by logging operations may have affected the fish, which depend on cool, clear, sustained flows and stable, structural elements of streams in old-growth forests.

But there are a host of other factors that may have contributed to the near-total wipeout along the Northern California coast, Morse says.

“It may have been due to ocean conditions, droughts in the late 90s and, really, any of a number of things. There isn’t any hard-core evidence pointing to one single thing.”

In an effort to re-establish the coho to the Russian River Watershed, Morse said the Russian River Coho Salmon Captive Broodstock Program was launched by the DFG in 2001. The program, which oversees the spawning of captive-reared wild coho broodstock, produced 92,000 fingerling coho salmon that were returned to tributaries of the Russian River last year.

Most of the coho salmon returning to spawn this winter were hand-raised in the Broodstock Program, Morse said. They were released in small tributaries of the Russian River in 2007 and spent two years in the ocean before returning as adults to spawn.

Morse said the Sonoma County Water Agency has a video counting station at Mirabel Dam that provides an account of most fish returning to the upper reaches of the Russian River. Most of the coho reared at Warm Springs Hatchery return to spawn in tributaries located below the video station and thus are not counted by the video station. However, four coho salmon have been recorded passing over the dam and a fifth coho was recently found dead on the riverbank.

In addition to the five coho, 1,770 Chinook salmon and 30 steelhead trout have been recorded by the video station since October. Weekly counts and video of salmon and steelhead are provided online.

Two factors are at work here. First, there is the broodstock program. But that program could not work were it not for rain.

“Winter rains are really critical for the salmon that come in to spawn,” said biologist Paula Bouley who works for the environmental group SPAWN. In an interview with NBC Bay Area.com, she said that last year, only a handful of salmon returned to the watershed to lay their eggs. Bouley called it a perfect storm of problems on the creek and in the ocean. But this year, biologists are seeing larger numbers of Coho return.

“Based on ocean survival rates, we’re expecting two to three hundred fish at minimum, and hopefully more,” she said in the interview.

Hundreds of visitors are lining the creek to witness the spectacle, easily spotting the bright red flanks of the fish.

It is an emotional experience for the people – like seeing old friends come ’round the corner, just in time for the holidays.