It was a sobering moment.

The new director of the University of Iowa’s School of Journalism and Mass Communications, David D. Perlmutter, last December distributed a chart to members of his school’s professional advisory board. It showed that applicants to the school were so flat this past year that practically anybody who applied was approved for admission to the two-year undergraduate program. It begged the question many people in the field are asking, to wit, what’s a journalism school to do?

According to Perlmutter and other J-school leaders, the answer is easy. Innovate.

“I think our courses need modernization and improvement,” he said. 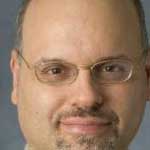 Central to the changes will be a new focus on strategic communications, including marketing, media relations, health and sports communication, and philanthropy, he said an interview with the university’s newspaper, The Daily Iowan. The school is also considering implementing classes in finances to give students basic financial knowledge.

The entire curriculum, from the introduction courses to Ph.D. seminars, are set to be reviewed this spring, Perlmutter said, including an effort in re-branding the school to, perhaps, put more emphasis into its current “journalism and mass communications” moniker.

The process of re-drawing the undergraduate curriculum began with his announcement of a joint effort by the J-School and the computer science department to conduct a class in building an iPhone App. It’s the start of a long process that will involve just about everybody connected to the school.

Beyond the academy, the landscape is bleak.

Five thousand newspaper jobs were lost in 2008, according to the Pew Research Center. Since 2001, more than 10,000 newspaper journalists have lost work, Pew reported, leaving the total count of those still employed at 47,000 nationwide. But wait! It’s worse! Erica Smith, who runs the online layoff tracker Paper Cuts, was quoted by Forbes.com saying that nearly 7,500 more newsroom jobs evaporated in 2009.

That is not to say that journalists are going away anytime soon. The blogosphere, the Twittersphere, the Farkosphere and et. al. are all still humming along, waiting for young journalists — and journalism schools, to catch up.

Here’s Perlmutter, by the way, on the Daily Show a while back, when he was just about to leave Kansas University for the University of Iowa.

One thought on “What now for J-Schools?”