Living in the middle of the dot-com bubble, 10 years ago today, we all were millionaires. Not really, but we were on the outskirts, and we could see Downtown Millionaireville from where we stood. 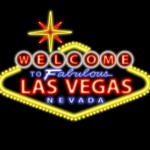 And then we all went to Vegas.

There was a guy who worked our search-engine team (not Google or Yahoo or Microsoft) shortly after the day it all fell apart. He was among the first of our team to be laid off as a result of the crash. When he left, he sent the team an e-mail, and his subject line was “Goin’ to Vegas.” In the weeks and months that followed, as the Nasdaq index fell from its high of 5,048.62, more and more of the team left, and each left the subject line, “Goin’ to Vegas.”

We all knew what that meant. May as well shoot craps than stay in tech. 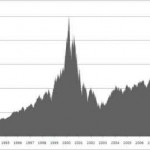 In a sorrowful report from Declan McCullagh at CNET,  McCullagh wrote, “If you consider the devaluation of the U.S. dollar during that period caused by the Federal Reserve, the Nasdaq has dropped from an inflation-adjusted high of 6,352–an even more vertiginous plunge of 63.15 percent.”

The days of easy-going, $20 lunches in San Francisco’s South Park were over, never to return. 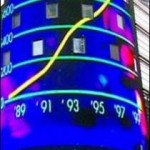 The crash reverberated throughout the economy, according to a report by John Authers and Michael Mackenzie in the Financial Times.

“Arguably, the dot-com boom ushered in the historically low interest rates from the Federal Reserve that are now widely blamed for allowing the housing and credit bubbles. It also paved the way for lightly regulated hedge funds to succeed mainstream mutual funds as the critical drivers of the market.”

There were plenty of bright stars after crash. Google, the single biggest winner in the Internet economy, went public a full four years after the bubble burst. During the bubble, Amazon reached $89, well below its high of $142 in December 2009.

And so today is a good time for reflection, to remember where we all were, what we dreamed was possible and what we learned when our fantasies blew apart.

In the Authers-Mackenzie report, this paragraph:

“Tech constantly gives rise to more cutting-edge and innovative companies than any other industry,” says James Paulsen, chief investment officer of Wells Capital. “You do have mature cycle tech companies, but it is also the place where you find the next growth stocks. We can have great returns in tech, but it will not get us back to 5,000 in a hurry. That high—5,000—is testament to how absurd the bubble really was.”

VIDEO: The Crash, more or less