The city that the Associated Press labeled the most obese city in America, then found itself as the focus of celebrity chef Jamie Oliver’s “Food Revolution,” is about to begin its effort in improving its diet. 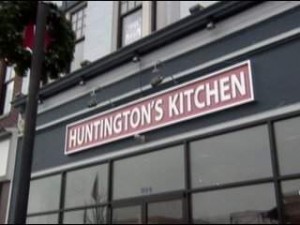 The Ebenezer Medical Outreach Center in Huntington, W.V.,  is to host a special premiere of Oliver’s “Food Revolution” television series on March 20, and is using it as a fundraiser for the the re-labeled and re-opened “Huntington’s Kitchen.”

“I’m just nervous how it’s going to last, how it’s going to go,” said kitchen chef Jill Moore, a Huntington resident who received training from Oliver’s staff in London. In an interview with WSAZ-TV, she said, “I had to place my first food order last week, and that was a little intimidating.”

For the Appalachian college town (Marshall University), taking charge of Oliver’s project is the first step toward fulfilling his TED Prize in which he made the case for an all-out assault on Americans’ and British ignorance of food.

The TED Prize, given at TED’s annual conference in Long Beach., Calif.,  is awarded annually to “exceptional individuals” who receive $100,000 and “One Wish to Change the World.” 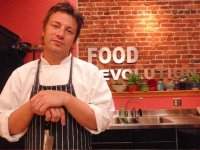 od revolution” in the U.S. by opening cooking schools and kitchens, along with doing educational outreach in towns like Huntington.

Huntington was identified as the most obese city in America by the AP, which used 2007 data from the Centers for Disease Control and Prevention. The CDC itself does not rank metropolitan areas, but an interactive map ranks West Virginia as the fifth most obese state, behind Mississippi, Alabama, Louisiana and Tennessee.

It is not the first time Oliver has used food and cooking as a social tool.

Oliver created the Fifteen Foundation in 2002. Each year, 15 young adults who have a disadvantaged background, criminal record or history of drug abuse, are trained in the restaurant business.

In 2005, he initiated a campaign called “Feed Me Better” in order to move British schoolchildren toward eating healthy foods and cutting junk food. He created “Jamie’s Ministry of Food,” a series where Oliver travels to inspire everyday people in Rotherham, Yorkshire, to cook healthy meals.

His latest project has been in Huntington, where he opened the local kitchen in 2009. At the kitchen, people register for 10 classes for 10 weeks. The classes are free, although the kitchen asks for a  donation of $10. The classes are to focus on recipes created by Oliver, promoting healthy, fresh ingredients rather than frozen or processed food.