Even as Australian salvagers struggle to stop a Chinese ship from spilling hundreds of tons of oil onto the Great Barrier Reef, scientists are working on another Reef relief angle—reducing livestock belches and farts.

Dr. Tony Parker, from James Cook University, says his “reef and beef” study examines whether feeding cows seaweed would reduce their flatulent carbon emissions, in a move that could help save the Great Barrier Reef.

He said cattle produced up to 20 per cent of global man-made methane emissions, and the problem was largely linked to their diet.

“Orkney sheep are ruminants that live off seaweed and they do very well on such a diet; so the obvious question is, why can’t cows?” said Parker in a press release from the university. 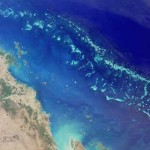 “I like to call it the ‘reef and beef’ project because it has far reaching implications that come full circle: starting with seaweed, taking in the beef and aquaculture industries, and extending back out to the sea to help conserve the Great Barrier Reef.”

The Inter-governmental Panel on Climate Change (IPCC) calculates that methane makes up 14.3% of human contribution to global warming, and data from the National Oceanographic and Atmospheric Administration (NOAA) in the U.S. shows that atmospheric methane levels may be rising again after a 10-year period of stability. 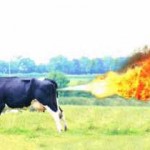 Cattle production of methane is caused by the microflora in their gut that helps them to digest their food. As these microbes break down the grass’ cellulose, methane is produced as a by-product, the majority of which is burped out the north end, or dispensed out the south end, so to speak.

Rocky de Nys, Parker’s research partner, said, “seaweed, algae and other sea grasses have been proven to be much more digestible than land grass because they have less cellulose and more starch. A better diet for cattle, then, will encourage better digestion and thus lead to a decrease in methane emissions.”

Methane gas from livestock accounts for about 12 per cent of Australia’s annual greenhouse emissions, with flatulence from 120 million sheep, cows and goats comprising its third-largest source of damaging gases. 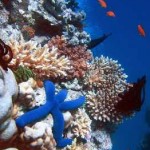 Greenhouse emissions are believed to be partly responsible for rising water temperatures that have caused “coral bleaching,” leading to the death of corals. The Great Barrier Reef is the world’s largest organism, and is the only living organism that can be seen from space.

U.S. Environmental Protection Agency
How much methane is produced by livestock?