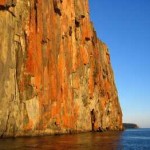 Just as hard to imagine is the sight of the area’s aboriginal people shaking hands with officials from Ottawa.

It’s about to happen in Canada’s Northwest Territories, in a stretch of land along the Great Slave Lake, known as Thaidene Nene, where four decades of aboriginal resistance to the idea has melted away.

The national government in Ottawa and the region’s northern aboriginal people, Lutsel K’e, hammered out a framework agreement in early April, nearly completing a process that began 41 years ago.

The next step is for the native people and Canada’s federal government to work out boundaries, as well as agreements to ensure local people share in job opportunities and economic benefits. 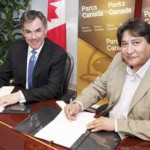 In announcing the agreement, the chief of the Lutsel K’e Dene (one of many so-called “First Nations” of Canada) said his people are interested in “the integrity of the ecosystem.”

“Our culture, our language and our spirituality is connected to the land and the integrity of the land is directly connected to our people’s future,” said chief Steve Nitah, who signed the agreement with Jim Prentice, Canada’s environment minister.

Thaidene Nene, which means “land of our ancestors,” is an area of spectacular shoreline and islands. Waterfalls and canyons occur along the rivers flowing into the lake. The land bridges the northern boreal forest and barren-ground tundra and is home to a wide variety of wildlife. 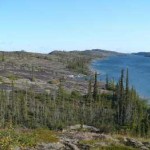 In 1969, Canada approached Chief Pierre Catholique of the Lutsel K’e Dene First Nation in the interest of obtaining First Nation support for the park. It did not go well.

Traveling with Canadian parks officials, the chief was taken immediately to Ottawa to sign a document providing support for the park.  But Pierre Catholique declined to sign, saying he felt rushed and coerced. Moreover, he said at the time that felt his people would lose jurisdiction of their traditional homeland.

After his trip, he called for a meeting of Dene chiefs, and in remarks that were widely quoted throughout Canada, he said,

In making the declaration, Pierre Cathlolique (video) in effect founded  the Indian Brotherhood, which later evolved into the Dene Nation.

Lutsel K’e and Thaidene Nene
A collaborative research project exploring the role of a National Park in a community’s development.