It’s not just the bodies of frozen climbers that catch your attention in Mt. Everest’s “Death Zone.” It’s also the staggering amount of trash—an estimated 10 tons of it. 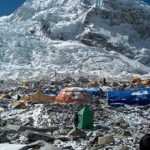 Just as staggering is the notion that an expedition is now en route to begin a clean-up.

Scattered along the Southeast Ridge route, the most popular ascent route on the 29,035-foot mountain, there are ropes, tents, oxygen cylinders, inessential packaging, batteries, medicine, and lots of other stuff, including bodies.

A team of 20 Nepalese Sherpas will work above 26,240 feet in the “Death Zone,” so-called because of the thin air and treacherous conditions. 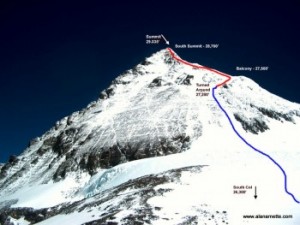 The expedition hopes to retrieve five bodies, including American Scott Fischer, who died in 1996, and Swiss mountaineer Gianni Goltz, who died in 2008.

Scores of corpses preserved by the freezing temperatures remain on the mountain, some for decades.

The expedition began April 17 and will reach the Everest’s South Col by May 1.

After setting up camp on the South Col, the team will climb to the summit of Everest and start working its way down, picking up trash as they go. 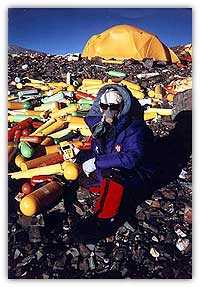 He said this is the first time anyone has cleaned up rubbish in the Death Zone, but that it is important to do so to preserve the environment and make the mountain safe.

“I’m a climber and I can say frankly that I’m a little bit angry when I climb Mount Everest because of the rubbish,” he said. As for the bodies, “I have seen three corpses lying there for years,” he said.

Others are a bit more non-plussed, given the sheer horror of it.

“It was a sobering experience to hear about people dying even as we continued to climb. In fact, as we made our way up the trail we passed a dead climber whose frozen body looked as if it had been lying there for several years,” recalled Alan Mallory on his family’s website, and who was 23 at the time of his climb. “Bodies that are lying close to crevasses or cliffs are sometimes pushed over so there aren’t corpses littering the trail. It sounds grim, but that’s the way it is.” 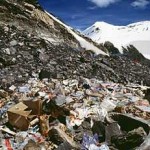 Because of the lack of oxygen, freezing temperatures and punishing conditions, the Sherpas say they will not be able to carry more than 44 pounds per person and that they will spend no longer than 12 hours above 26,2457 feet in one go.

They plan to stay on the South Col for a week, making several trips into the Death Zone, before returning to base camp, resting, and then repeating the operation twice more.

As many as 400 people each spring and fall attempt to climb Mt. Everest and the increase of adventurers has led to an increase in litter, especially along the Southeast Ridge. The trail consists of a base camp at 17,600 feet and four additional camps closer to the summit. Since the first successful expedition, at least 50 tons of trash accumulated.

This expedition is not the first to target the 50 tons of trash on Everest, but it certainly is the highest attempt.