Now that the warm weather has arrived in China, there is—cough cough cough—a problem. Beijing’s astonishing 18,400 tons of household trash per day stinks to high heaven. 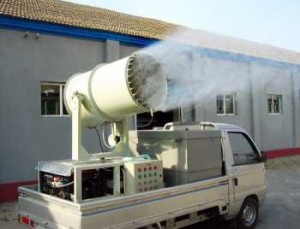 Raise your hand if you're Sure!

But for the 17.5 million residents of the city, relief is on the way, or so say the inventors of a “deodorant cannon” that is now in use in the city’s 13 landfills.  Things tarting to smell bad? Back up these cannons and let ‘er rip!

The cannons, officially termed “high pressure long-range deodorant sprays,” blast a liquid created from plant extract onto waste arriving at the site. The biological compound supposedly neutralizes the smell,then the fragrance-covered household garbage is then buried under odor-eating covering sheets and more deodorant is sprayed on top. 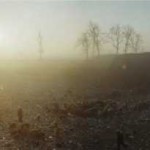 “Whenever the bad smell comes we are all coughing.” said resident Geng Haiou in an interview with Reuters. “At night we all wake up coughing. Even when you are sleeping soundly, you can wake up coughing. Everyone opens their windows in the summer and there is that smell,” she said, scrunching her nose.

The deodorant cannons were invented at the Gao’antun Garbage Landfill Plant, in Beijing’s suburbs. Earlier, local officials were forced to apologize for the foul smells coming from the dump.

The strategy seems desperate, though, according to some critics.

“The cannons are stench-neutralizing tools that should be used under special circumstances,” said Nie Yongfeng, Professor of Environmental and Engineering Sciences at Tsinghua University. “But we cannot keep blasting all day long. We do not have that many cannons.”