Over 82,000 automated voting machines in the Philippines have failed to recognize candidates running for elected office, just days before the May 10 elections. 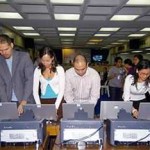 The voting machine failures caused more unrest and fears of fraud among the candidates and voters.

The Commission on Elections (Comelec) confirmed that it is re-testing the memory cards and says it plans to have the software issues corrected by Election Day.

“We had some problems with the configuration of the machines,” said Comelec spokesman James Jimenez, who spoke with BBC. “Some of them weren’t reading the ballots properly. So we’re pulling out all the memory cards and re-configuring them, then we’re going to retest them on Friday.” 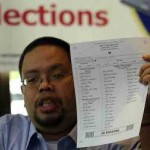 Despite calls by citizens and Sen. Benigno “Noynoy” Aquino III, a presidential candidate, for a manual count, Comelec has opposed the proposal.

“What is important is the integrity of the process and its final outcome. If full manual counting is the practical solution, then let us do it, no matter how long it takes to finish,” Aquino told ABS-CBN News. 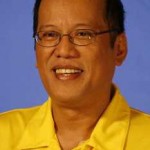 A citizen-led elections watchdog group, Kontra Daya ,voiced its concerns of fraud and failure for the elections in an open letter dated Feb. 17 to Comelec.

“We hope the Commission can take note of these observations and recommendations. The biggest fear of people right now, candidates included, is that the automated election system is vulnerable to rigging or that there may be failure of elections if all does not go well,” wrote Kontra Daya. 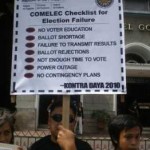 Earlier in March, Flores told GMA News he was confident in the voting system’s accuracy.   “We reiterate our commitment to the Filipino people: the automation system will provide fast and accurate elections.”

Meanwhile, Romulo Macalintal, the election lawyer for President Gloria Macapagal-Arroyo, resigned over their disagreement to delay the elections for 15 days “to prevent failure of election or holdover of incumbent elective officials.”

According to Macalintal, he advised the president to delay the elections due to the recent voting-machine malfunctions.

In a statement released by Deputy Presidential Spokesperson Gary Olivar, the current president “respects the independence of the Comelec, and defers to its judgment and decisions on all matters regarding the conduct of elections.”

One thought on “Thousands of Philippine voting machines on the blink”