It’s hard to imagine that a dam that is twice the length of Hoover Dam and is visible by satellite imagery would go unnoticed for 35 years. But then again, there aren’t that many visitors to Canada’s remote “Beaver Belt.” 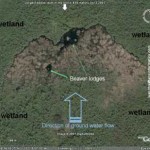 The dam—a beaver dam in a remote southeast corner of Wood Buffalo National Park in Alberta—was discovered in 2007 by a scientist who was working out the effects of melting permafrost. Jean Thie, an environmental scientist working with Google Earth as a tool, started noticing the beaver dams and measuring them as a hobby.

“This one is spectacularly long,” he said in an interview with the Edmonton Journal. He said most beaver dams are less than 300 feet long.

Said Thie of the location of the dam: 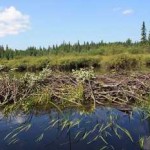 “It is part of the ‘beaver belt’ that runs from lower lands around the Riding Mountain National Park (in Manitoba) up through (Alberta’s) Birch Mountains.

“There are some really exceptional beaver landscapes, where you have hundreds of dams that are affecting the streams. Usually these are inaccessible areas, like this one.”

Before Thie’s discovery of the 2,790-foot Alberta dam, the largest beaver dam was believed to be near Three Forks, Mont., at 2,140 feet. 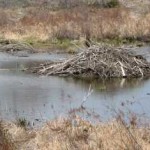 The Alberta dam could be bigger in the near future, too, said Thie on his website.”(Pictures show) new dams being built which could ultimately join the main dam and increase the overall length by another 50-100 meters in the next decade,” he wrote.

The dam was unearthed, so to speak, by a group of journalists traveling to Wood Buffalo National Park to film a documentary on wolves. In their research, they found his 2007 website posts, then called park spokesman Mike Keizer, and asked if they could visit the world’s biggest beaver dam while they were in the neighborhood.

Keizer said he didn’t know anything about a big beaver dam in the park, and they pointed him to Thie’s website.

Keizer’s staff located it deep in the boreal forest just south of the Birch Mountains, halfway between the south tip of Lac Clair and the mammoth park’s southern boundary. 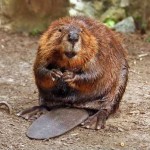 It is believed that the beavers of Wood Buffalo have worked for at least 35 years to build the dam. Reporter Karen Kleiss of edmontonjournal.com put it this way: “It means it has already taken 15 years longer to build than the Taj Mahal, one of the seven wonders of the world.”

A beaver shapes a dam according to the strength of the water’s current. Relatively still water, such as that in the Wood Buffalo National Park, encourages dams that are almost straight. Dams in stronger currents are curved, bowed toward upstream.

The beavers use driftwood, green willows, birch and poplars; and they mix in mud and stones that contribute to the dam’s strength. When some of the sticks used in the dam “truncheon” (start to grow) the tangled roots contribute more strength to the dam.

Beavers build dams as protection against predators, such as coyotes, wolves and bears, and to provide easy access to food during winter. Beavers always work at night and are prolific builders, carrying mud and stones with their forepaws, and timber between their teeth.

Alberta beaver dam can be seen from space
Edmoton Journal, May 6, 2010

THE LONGEST BEAVER DAM IN THE WORLD