Former San Francisco Mayor Willie Brown and two Zimbabwe gay and lesbian activists are off the hook in Zimbabwe—for now.

A Zimbabwe court released the two LGBT activists on bail May 27 after they were arrested for possessing “indecent material” and hanging a letter on their office wall from the flamboyant Brown. The letter was considered “insulting” to President Robert Mugabe, according to pinknews.co.uk. 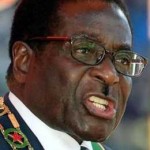 Ellen Chadehama, 34, and Ignatius Mhambi, 38, both work for the Gays and Lesbians of Zimbabwe (GALZ) and will now face trial on June 10, when they could be sentenced to imprisonment.

The mayor’s letter denounced Mugabe’s opposition to homosexuality and praised GALZ for its work, according to defense attorney David Hofisi. Police also accused the activists of “undermining the authority of the president” by hanging the letter in the GALZ office.

Hofisi also claimed both were forced to squat with arms outstretched and were hit with bottles when they became weak or wobbled while in prison, according to the article.

Mugabe has been quoted in many news sources saying that same-sex partners are “lower than dogs and pigs.”  Although homosexuality is illegal in Zimbabwe, as in most African nations, arrests there like these are rare.

The incident is just one of many recent moves against LGBT couples and activists across Africa. 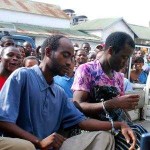 Steven Monjeza, 26, (left) and Tiwonge Chimbalanga, 20, of Malawi. Handcuffed together and driven away as onlookers cheer.

On May 20, two Malawi men, Steven Monjeza, 26, and Tiwonge Chimbalanga, 20, who became engaged, received 14-year sentences after being convicted of indecent acts—including sodomy, according to Reuters.

Another Malawi male was charged in February for pasting up posters that read “Gay rights are human rights,” according to CNN. 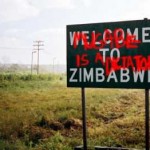 Namakhwa asked gay rights activists to ”come out in the open” so they could be arrested.

Uganda’s government has gone even further in its moves against homosexuality after a Ugandan parliament member introduced the Anti-Homosexuality Bill 2009 which includes a possible death penalty for “aggravated homosexuality.”

The term is described as have gay sex with someone under 18 or is HIV-positive, gay sex when the offender seduces with alcohol or drugs, or the victim of the offense is someone with a disability, according to Global Post.

Homosexuality is illegal in Uganda already and could be punishable by very long terms in prison.

Galz Pair Accused of Insulting Mugabe and Possession of Pornography
allAfrica.com, May 25, 2010

Malawi minister urges gays to ‘come out in the open’ to face arrest
Nyasa Times, Feb. 9, 2010