Fairbanks is smoky. Anchorage is smoky. To be in Alaska this early June is to see skies of haze, mixed with the scent of burning forests. 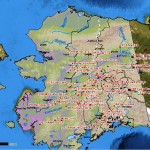 Because of an unusually dry winter and spring, 293 wildfires already have burned some 463,000 acres  according to the Alaska Interagency Coordination Center in Fairbanks. Alaska experienced unprecedented fire activity during May that was more characteristic of extreme July conditions, the center noted. Most of the wildfires are lightning-caused, and are located southeast and west of Fairbanks.

Persistent heat and a lack of rain have been rampant in interior Alaska over the past two weeks. 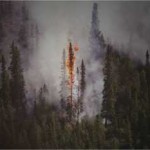 In Fairbanks, high temperatures have averaged more than 11 degrees F above normal in that time, while it has received only 40 percent of its normal May precipitation.

Highs in Anchorage have also been above normal, averaging over 10 degrees F during the past week. Only 26 percent of typical precipitation for May has occurred in Anchorage.

Firefighters from the Pacific Northwest have been streaming into Alaska to help with the fires. More than 30 employees of the Washington State Department of Natural Resources (DNR) are in Alaska this week helping crews there deal with an outbreak of large wildfires that have consumed more than 270,000 acres.

“We are pleased to help our neighbor to the north in their time of need without diminishing our capacity to respond quickly to wildfire threats here in Washington State,” said Commissioner of Public Lands Peter Goldmark. 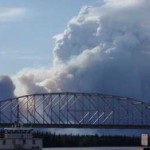 Forecasters expect that burn acreage to exceed 900,000 by the end of June.

A forecast Tuesday by the National Interagency Fire Center, and reported by USA Today, also warned of increased fire risk later this summer for parts of Northern California and Nevada; a large area of northern Idaho, western Montana and Wyoming; and parts of eastern Washington state.