Manute Bol is dead, and the world has lost one of the most iconoclastic freedom fighters in modern times. 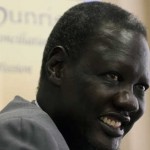 The reed-thin Dinka (Sudan) tribesman who parlayed his 7-foot, 7-inch height into a improbable NBA professional basketball career, died June 19 in Charlottesville, Va. A spokesman for Sudan Sunrise, a Kansas City-based foundation, said the cause was kidney failure, coupled with a crippling skin disease.

With his death, the war-torn Sudan lost a tireless and good-natured friend who gave most of his estimated NBA earnings of $6 million back to his country for a variety of peace efforts, including the construction of schools. 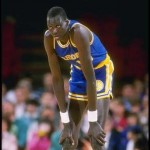 “There’s no way I can put the money in my pocket while my people are getting beat up,” said in an interview with the Kansas City Star last May. “Whatever I can do to help my people I will do. I feel whatever I make here I make for my people.”

He was once lured back to his home country with the promise of a cabinet post, only to find out he would be required to convert to Islam. When he refused, he was stranded for nearly five years. 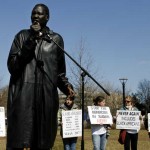 Even while playing, he went into war zones to help the Lost Boys and other refugees. Sometimes, those visits were interrupted by bombings from warlords who viewed Bol as a threat.

His family was wiped out by Darfurians, but when that country became victims, Bol was one of the first Sudanese to speak out in support. A Christian, he told his people that extremists were the enemy, not Muslims.

He was believed to have been born on October 16, 1962 in either Turalie or Gogrial, Sudan. He was the son of a Dinka tribal chief, who gave him the name “Manute,” which means “special blessing.” 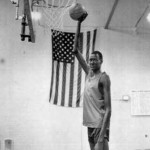 As a boy, Bol had tended his family’s cattle. According to a tale of an initiation rite, which he was often asked to repeat in interviews, he once killed a lion with a spear while he was working as a cowherder.

“It wasn’t hard,” he said in a Bay Area cable television interview, his face opening into a wide grin. “The lion was asleep.”

After his career, he frequently visited Sudanese refugee camps and in 2001 was offered a post as minister of sport by the Sudanese government. Bol, who was Christian, refused because one of the pre-conditions was converting to Islam. 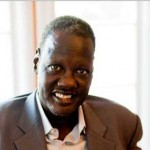 As a consequence he was hindered from leaving the country by the Sudanese government, who accused him of supporting the Dinka-led Christian rebels, the Sudan People’s Liberation Army.

Sam Mellinger, a Kansas City Star columnist, put it like this in a column on May 29:

“Bol symbolizes an unfortunate side of our sports obsession and how we measure the worth of those who play. The best athletes get the love, most times regardless of what they do away from sport. Bol, doing the work of a saint, is largely ignored.”

VIDEO: A player and humanitarian. NBA.com