A rare breed of dolphins in Southeast Asia is on the brink of extinction, according to a conservation group. 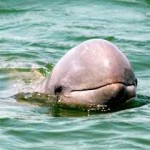 The Irrawaddy dolphins (Orcaella brevirostris) are oceanic dolphins located in countries such as Cambodia, Laos, and Myanmar.  In a 2009 report released by conservation group, World Wildlife Fund (WWF), there are an estimated 64 to 76 dolphins remaining in Cambodia’s Mekong River.  The river runs over 100 miles through parts of Cambodia.    It is also considered one of the major rivers worldwide.

Pollution, inbreeding and accidentally net deaths are cited as reasons for the decline of dolphins along the Mekong River.

“With such a high and unsustainable mortality rate, and marginal recruitment due to the large proportion of calves dying, the Mekong Population is likely to be the most critically threatened population of freshwater Irrawaddy dolphins. With this population in serious decline, they face extinction in the near future, if immediate conservation action is not taken,” the study reported.

“These threats may all be additive or synergistic in their complex relationship to each other, making the overall conservation solutions very difficult.  Integrating these health issues as one component of conservation, into policy development, will be crucial to the overall success of this project, to reverse the population decline and save the Mekong River dolphin (Orcaella brevirostris) from extinction.” 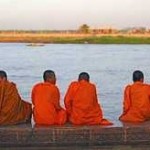 Monks hanging out by the Mekong River in Cambodia

However, the Cambodian government disagrees with the WWF’s 2009 report.  Touch Seang Tana, the chairman of Cambodia’s Commission to Conserve Mekong River Dolphins and Develop Eco-tourism, strongly opposes the WWF’s findings.   “It’s big trouble — they (the WWF) should resign. They should leave Cambodia,” Tana told AFP.

“They published this without consulting me, and I’m the authority here.”

In 1995, the Cambodian, Vietnam, Lao and Thailand governments created the Mekong River Commission to manage and conserve the river and its resources, such as the Mekong Dolphin.

“The Mekong Dolphin is an icon of the region, symbolizing the vitality and spirit of the Mekong River, but unfortunately it is now only found in a few areas of the river and is considered an endangered species,” reported the commission. 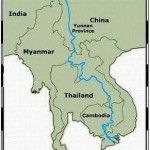 In 2008, the International Union for Conservation of Nature (IUCN) listed the dolphins as critically endangered species in the region.

According to Nicole Frisina, communications manager for WWF Greater Mekong Programme, the 2010 Mekong River dolphin report will be released soon.  “There is no new information as yet, the team is currently conducting a population survey of the dolphins in Cambodia with results due to come out around August this year,” Frisina told Newsdesk.

International Union for Conservation of Nature

Mekong Dolphins on the Brink of Extinction

One thought on “Southeast Asia dolphins near extinction”