Heralded by scientists as a near-miracle food, a protein-rich algae has potential to abolish malnutrition. 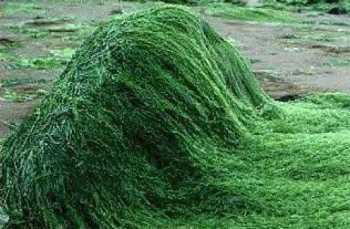 “It gives you energy,” said Barkadressou village chief Ousmane Issa Mara in an allAfrica report. “After eating spirulina cakes, our sub-prefect did not have any more health problems. It restores appetite to children who lose it.” Barkadressou is one of the 14 spirulina-growing sites in the EU-financed $1.7 million initiative.

Spirulina is lauded for its high levels of vitamin B and iron, and 70 percent of the plant’s dry weight is protein matter. The UN Food and Agricultural Organization (FAO) commented on its “small environmental footprint,” and the ease with which it is grown and digested.

Spirulina is found in mineral-rich soda lakes. There are many such bodies of water in Chad’s Kanem region, where one in five children is malnourished.

“It is lamentable how dry and barren the area is,” said Djari Ngamai, the governor of Kanem. The salt in the soda lakes prevents the survival of most wildlife, but Spirulina thrives.

Since the start of the UN cultivation project, hungry citizens have been driving to six hours to spirulina sites to purchase food made from the algae. 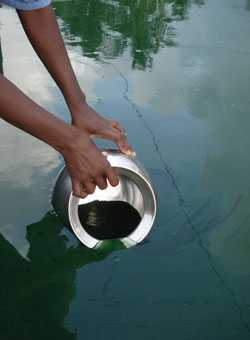 Alessandro Manini, the secretary of an Italian group dedicated to using spirulina to fight global hunger, credits its absence in marketplaces and impoverished villages to a “lack of political interest.”

An FAO position paper similarly said that the algae “has not yet received the serious consideration it deserves as a potentially key crop in costal and alkaline areas where traditional agriculture struggles.”

Early research also suggests that spirulina could aid in preventing and battling measles, mumps and possibly the HIV virus, because it strengthens cell walls.

Spirulina has been eaten in various parts of the world for centuries, and is commonly served in cake or cookie form. The algae is said to be bitter or unpleasant upon first taste, and consumers liberally add herbs such as cumin when possible.

VIDEO: Visit a local culture of spirulina in Madurai

Spirulina: the little algae that could
Healthadel, April 1, 2007

3 thoughts on “Algae could combat hunger”