Compulsory workplace exercise has returned to Beijing after a three-year hiatus.

On August 9, employees all around the capital city assembled at 10 a.m. and 3 p.m. for eight minutes of aerobics to a soundtrack of lively music on Beijing Sports Radio.

Mandatory physical exercise in the workplace was introduced in the city in 1951, to improve general health. The practice was suspended in 2007 so Beijing Sports Radio could devote its time to Olympics coverage. 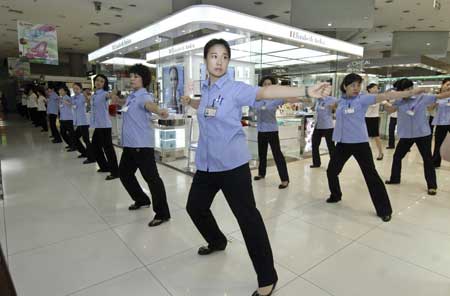 But the routine is back with a vengeance.

Advocates hope that private businesses will adopt the twice-daily workout eventually as well.

Many employees have responded positively to the re-introduction of calisthenics. A worker identified as Mr Sun by the UK Guardian said, “I think this is really necessary, because people’s living habits are very bad now. They sit in the office the whole day.”

“A couple of stretches may still be the best way for most office workers in Beijing,” said Beijing Sport University‘s Wang Lin. “Instead of going to gyms after work, they have to fight hard to commute back home, where chores await.”

Others criticize the program as invasive and costly. “We cannot stop working at 10 a.m. to exercise while customers are waiting,” said an anonymous bank employee in the Global Times report.

The implementation of this program will cause Beijing Sports Radio to lose 200,000 yuan—or $29,549.08—in advertising revenue. 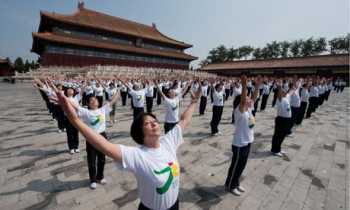 A number of recent surveys have reported an increase in many medical conditions and diseases in the workforce.

Though the country’s obesity rate of one out of 70 people is miniscule compared to the United States’ one out of three, it is the highest the previously food-insecure nation has experienced. In June, PBS reported that the obesity rate in China is increasing by 30 to 50 percent annually.

The current melange of dancing, yoga and tai chi is designed to combat these health issues. In the future, traditional forms of exercise, such as sports involving bamboo sticks and hacky sacks, will be included.