The wedding conductor spoke, her arms moving with slow jerky movements, as her large, egg-shaped, glowing eyes flashed from purple to blue to green and yellow. 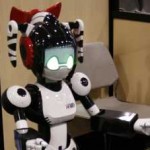 A Japanese bride and groom recently became the first known couple married by a robot, called I-Fairy, according to The Japan Times.

While the event could be considered cute, if a little odd, discussion about the role of robots in Japanese society is increasing, especially given large demographic shifts expected over the next 40 years.

That number is expected to balloon to about 41 percent by 2055, while the population is predicted to shrink from around 127 million to 90 million people.

With the growing number of elderly, who will take care of them given a dwindling workforce?

A Wired magazine article from January 2010 cited a Japan Machine Industry Memorial Foundation estimate that Japan would save about $21 billion each year using robot nurses to monitor the elderly. 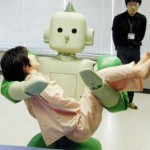 Robots are seen as a potential solution to the population problem versus the politically sticky solution of allowing large numbers of foreign immigrants to fill much-needed health care positions and low-skill service-oriented roles.

One of the largest obstacles to foreign workers is overcoming the Japanese language barrier.  A BBC report said that approximately 98 percent of foreign nurses fail a language test required to stay in the country for three years of work.

Foreign workers only make up about two percent of the Japanese population versus about 15 percent in the United States.  Some reports suggest the Japanese government has a strong xenophobic attitudes toward immigration. 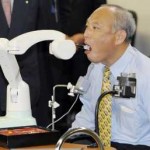 A United Nations representative said in 2006 that the Japanese government needed to overcome its attitude toward combating racism and xenophobia, according to a Japan Times report.

The government in 2009 unanimously passed laws to encourage higher birth rates among Japanese by trying to remove the “workaholic” aspects of the society, according to the PRB report.

The provisions include increasing the amount of time husbands spend on child care and encouraging workers to use 100 percent of their paid annual leave instead of the current 47 percent average usage.

Past incentive programs like these have resulted in minimum success.

It’s still unknown whether Japan will choose a long-term solution to its population issues by allowing more foreign workers or increased use of robots.

Japan may pick robots over immigrants

Robot Nurses to Care for Japanese Elderly within Five Years