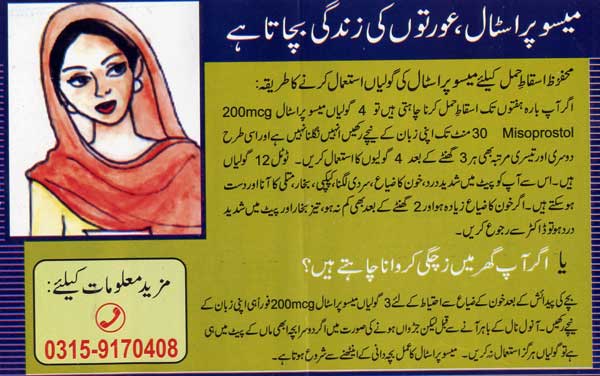 The hotline, which was created by Pakistani and Dutch women’s rights organizations, advises women on the use of misoprostol to self-induce abortions.

The inexpensive drug is primarily used to treat postpartum hemorrhages, to prevent ulcers, and to induce labor. It is also used as an alternative to illegal or expensive surgical abortions.

In a Change.org report, hotline chairwoman and founder Gulalai Ismail said her general goal as an activist is “to promote sexual and reproductive health rights of young people, not only at community level but also at a policy level.”

She created the hotline in hopes of lowering the high rate of pregnancy-related deaths in Pakistan.

According to an Inter Press Service report, there are 30,000 pregnancy-related deaths each year in Pakistan, and between five and 15 percent of these are due to abortions.

Terminating pregnancies is illegal in the country unless the mother’s life is in danger, and hospitals treat approximately 2,000 patients each year who have complications from illegal procedures.

The hotline is called Sahailee — “female friend” in Urdu — and is running in three Pakistani cities, including the nation’s two largest. The operators were trained for three weeks and are familiar with misoprostol and its side effects.

Immediately following its launch, religious leaders in the overwhelmingly Muslim nation spoke out against the hotline.

“To go against the majority like this might be seen sympathetically in the West, but it will be counterproductive and will create huge problems,” said Chairman of the Islamic Human Rights Commission Massoud Shadjareh, as reported in The Independent. “At best, they are misguided, at worst they are trying to provoke. It is part of the colonial idea that the West’s way is the best, and that is not the case.”

According to the newspaper, Shadjareh also said the hotline’s organizers risked “reprisals.”

Ismail said such opposition is hardly surprising. “Any groups which try to help women will have problems with extremist and fundamentalist groups,” she said. “We are there to save women’s lives. The law gives us permission.”

Less expected is the criticism from some doctors and abortion advocates.

Imtiaz Kamal, the president of the Midwifery Association of Pakistan, told IPS that misoprostol should not be taken without heavy consideration or under the administration of a doctor.

In the same report, a hotline operator insisted, “We always tell our callers that it is advisable to take the drug in the presence of a skilled birth attendant.”

“I was not aware that this use [of misoprostol] is so brazenly being promoted in Pakistan, when even developed countries have balked at such use and advertisement,” said Zulfikar Bhutta, the head of pediatrics at the Aga Khan University Hospital. “You can imagine that in the hands of untrained staff, this can be problematic as well.”

Women on Waves, the Dutch nonprofit involved in the creation of the hotline, reported that the drug has the same health impact as a spontaneous miscarriage.

“Follow-up treatment for miscarriage and even post-abortion care is legal everywhere,” whereas illegal abortions often result in immediate death, said the organization on its website.

In an interview with Change.org, Ismail said, “For us, the most important thing is to prevent the loss of women who die because of having unsafe abortions.”

Similar hotlines exist throughout Latin America, but Sahailee is a first in Asia.

Controversial drug welcomed by some, worries others
IPS, August 10, 2010