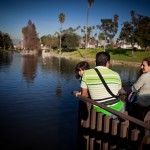 News about Boyle Heights in Los Angeles tends to be about crime or gentrification. There’s little coverage of air pollution, lack of safe and green spaces, lack of access to affordable and healthy food options — or the residents and organizations that are determined to change this.

“People really want to engage with us. They want to mobilize, act, and learn more,” said Lina Stepick, community organizing fellow at ELACC.

In January, the Clean Up Green Up campaign was launched and proposed to bring greener industries and jobs to “toxic hot spot” communities where concentrations of environmental hazards have resulted in high levels of health risks, including cancer and asthma. Clean Up Green Up is led by Communities for a Better Environment, Coalition for a Safe Environment, Pacoima Beautiful and Union de Vecinos.

“We know that Boyle Heights is very polluted and it’s a concern in our community. The children have asthma and there are more and more illnesses. We don’t know if it has to do with the pollution, the freeways, and the cars and trucks in our community,” said Angela Gutierrez, a volunteer at Union de Vecinos and White Memorial Hospital.

A mostly working class Latino neighborhood east of the Los Angeles River and north of the industrial city of Vernon, Boyle Heights has long been home to immigrant families, rich social capital and strong civic engagement.

It also has experienced generations of environmental inequality.

In the summer of 2006, The Southeast Regional Energy Center proposed building a 943-megawatt fossil fuel power plant that would emit approximately 1.7 million pounds of toxic pollution per year as well as 2.8 million tons of green house gases. The plant would have affected the communities living in the six-mile radius around the proposed 27-acre site on the southeast corner of Boyle and Fruitland Avenues in Vernon.

Residents and organizations from surrounding communities, including Boyle Heights, formed an alliance and fought against the proposed project for three years. In 2009, Vernon abandoned its plan.

The alliance led mostly by immigrant Latinas, youth, and supported by several organizations including Mother’s of East Los Angeles, Resurrection Church and Communities for a Better Environment was a victory for low-income communities across the country that are suffering from political, economic and social inequities.

“Environmental issues are just one of many issues of structural inequality faced by poor people of color. You can’t understand this issue as separate from the attacks on undocumented immigrants, inequality in schools, housing, and employment, police brutality, cultural language repression, all of the facets of people’s repression,” said Bill Gallegos, executive director of Communities for a Better Environment.

One thought on “In smoggy Los Angeles, one neighborhood pushes back”