Like “The Island of Misfit Toys,” many old electronics this holiday season get shipped off to distant places after being replaced. However, unlike the popular Christmas movie, most of this electronic garbage, or e-waste, won’t find a happy home in the end.

Most used electronics, which can contain high levels of toxins, will end up in landfills at home or abroad. 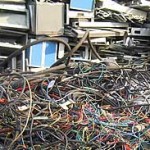 A study by the Environmental Protection Agency found that of 2.25 million tons of televisions, mobile phones and computers tossed in 2007, only 18 percent were recycled; the rest were thrown away, mainly in landfills.

Globally, 20 million to 50 million tons of electronic waste is produced every year, according to the United Nations.

And it appears most of the recycled electronic waste travels to poor countries.

In the United States, it is estimated that 50 percent to 80 percent of electronic garbage collected for recycling is exported to developing regions in the Far East, India, Africa and China, according to Greenpeace.

Though a major concern is not just the amount of waste, but also the dangerous materials contained in the old electronics.

While the toxic chemicals pose a threat to the environment, they also put in danger the people in developing countries who handle the large amounts of recycled electronics shipped from America and Europe.

But something can be done. Many retailers, such as Apple Computer and Best Buy, offer recycling programs for e-waste that will keep the hazardous material out of the environment and foreign countries.

During safe disposal (certified by a respected third party, such as e-Stewards), old electronics are normally sent to recyclers that will determine if a product can be repaired, reused or recycled. The electronics are then dismantled and its components are repurposed or sent to a more specialized recycler.

Remember, Santa Claus and Rudolph are counting on you.

“Management of Select Electronic Products in the US in 2007”
Environmental Protection Agency, July 2008

“Where does e-waste end up?”
Greenpeace

“E-waste, the hidden side of IT equipment’s manufacturing and use”
United Nations Environment Program