The warm temperatures that are playing havoc with the Winter Olympics in Vancouver, B.C. have less to do with El Niño than a little-recognized weather phenomenon called the Pacific Decadal Oscillation. 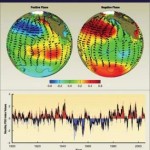 Lately, the PDO has been erratic, but it seems to have joined a rather weak El Niño to create the warm temperatures.

In a post by National Geographic News, a University of British Columbia scientist explains:

“Once El Niño starts, Vancouver typically gets warmer and slightly drier weather,” said William Hsieh, an atmospheric scientist at the University of British Columbia in Vancouver.

El Niño usually peaks in the tropical Pacific Ocean in December and January, but it takes about a month for El Niño waters to travel north to Vancouver’s latitude. “So our peak El Niño effect is around February,” he said—just in time for the Vancouver 2010 Olympics.

Even so, Hsieh said, “This is not a particularly big El Niño, whereas it’s a record [warm] January.” Hsieh said.

In recent years, though, the PDO has been fairly erratic, with fairly short cool and warm periods. The phenomenon had a cooling effect on Vancouver starting around late 2007, but last summer that effect disappeared quite rapidly.

“It sort of appeared to have faded and no one knows why,” Hsieh said. And just as the PDO’s cooling effect sputtered, in stepped El Niño. “That really stacked the deck against us,” he said.