The small, chinless “Hobbits” of Indonesia, cousins of modern humans also known as Homo floresiensis (“Flores Man”), turn out to be older than scientists had previously thought, according to a team of scientists at Australia’s University of Wollongong.

According to the university’s Web site, previous research by a joint Indonesian-Australian team in the Soa Basin of Flores in 2001 unearthed stone tools in ancient deposits dated to 880,000 years ago. This appeared to provide a maximum age for the arrival on the island of the ancestors of the so-called “hobbits,” who stood about three-and-a-half feet tall, had no chin and whose body types were characterized by a small brain and thick leg bones. 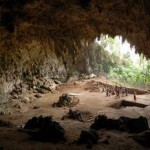 However, researchers recently discovered an even older site in the Soa Basin, Wolo Sege, which contains stone tools sealed by one million-year-old volcanic deposits, the university reported.  The findings also are reported in an article (“Evidence for hominins on Flores, Indonesia, by one million years ago”) in the latest issue of Nature magazine. 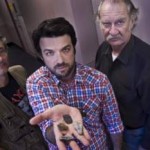 “These stone tools occur at the very bottom of the basin’s sedimentary sequence, and the bedrock on which the deposits sit is dated to 1.8 million years ago,” wrote Dr. Adam Brumm, on the university Web site. Brumm, the lead author of the study, is a Postdoctoral Research Fellow with UOW’s Centre for Archaeological Science, School of Earth and Environmental Sciences.

“This means that if humans were present on Flores significantly earlier than one million years ago any evidence they may have left behind would not have been preserved.” 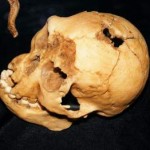 Partial skeletons of nine individuals have been recovered, including one complete cranium (skull), according to Wikipedia.  These remains have been the subject of intense research to determine whether they represent a species distinct from modern humans. This hominin is remarkable for its small body and brain and for its survival until relatively recent times—possibly as recently as 12,000 years ago.

Recovered alongside the skeletal remains were stone tools from archaeological horizons ranging from 94,000 to 13,000 years ago. The remains themselves have been dated to between 38,000 and 13,000 years ago.

Local geology suggests that a volcanic eruption on Flores approximately 12,000 years ago was responsible for the demise of the hobbits, along with other local fauna.