Like a blind-side hit in the backfield, the biggest news on the football coaching front comes from Washington, D.C., where Calvin Coolidge High School named Natalie Randolph as its new varsity coach. 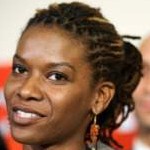 In taking the job on March 11, Randolph became the only woman varsity coach in the U.S. (fittingly, during Women’s History Month), and  everyone—from the school administration and the Mayor’s office, all the way down to the lowliest reserve player, loves the pick.

Washington Mayor Adrian Fenty proclaimed March 12 as “Natalie Randolph Day” in the District, and one of Randolph’s players, Oluwakemi Bamiro, was among many who said he supported the selection. In an interview with Washington Post columnist Michael Wilbon, Bamiro said after meeting the new coach: “It’s not like she’s new to us. She’s here as a teacher. I’ve learned a lot from her. I guess it’s because she’s a female coach. But if you think about it, women coach men in other things, like music.”

Make no mistake, though. Randolph, a 29-year old environmental sciences teacher at the school, knows sports—and knows football most of all.

A former University of Virginia track star, she played six seasons as a receiver for the D.C. Divas of the full-contact National Women’s Football Association, helping the team win the title in 2006. She also was an assistant coach from 2006-08 at another D.C. high school, H.D. Woodson.

She was chosen by a search committee from among 20 applicants, all of them qualified on the field.  But Randolph blew the committee away with her pitch:

She wants to raise grade point averages. She wants improved SAT prep classes. And she wants to win games.  “It wasn’t close,” a committee member said to Wilbon. “A couple of minutes into her presentation it was like: ‘Okay, it’s a wrap. She’s the one.’ ” 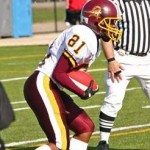 As a player, she was nicknamed “Nat-Nat,” and in her player profile, she characterized herself as “Proud, strong, resilient, humble, extraordinary, and a little bit crazy!”

Randolph is not the first woman to coach a high school varsity team. In 2004, Jessica Poseluzny coached the George Washington High football team in New York City for 10 years before she was let go, initiating a discrimination lawsuit against the school.

It was as nasty an ending as Randolph’s beginning was sweet, not that Randolph is going to relax or get too feel-goody about the whole thing.