The mayor of a Turkish resort town has been acquitted of misconduct charges in connection with his program of giving away drinking water. 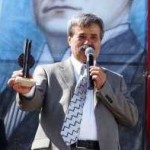 Osman Özgüven, mayor of the seaside resort town of Dikili, along with other municipality officials, stood trial for not charging local households for monthly water consumption below 10 tons, giving discounts on usage above that amount to municipal employees, making public buses free to ride, providing affordable health services at a government clinic and selling bread in municipal bakeries at lower than market prices.

He was charged with “misconduct of office” and “abuse of power.” Özgüven, a member of the progressive Republican People’s Party, stood trial at the Dikili Criminal Court of First Instance. Officials confirmed his acquittal on March 31.

“The court accepted our activities as a public service,” he said in an interview with bianet.org, the English-language news Web site in Istanbul. “It registered that water should not have to be purchased with money and should not be commercialized. This is what we claimed from the very beginning. This is a right of life and addresses (the needs of) humanity. 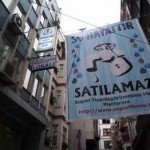 Istanbul banner: "Water is life. It cannot be sold." (Photo Aoi | AM NET, Japan | via Flickr)

“Other municipalities should learn a lesson from our implementations and the according court decision,” he said. “It should be our duty to provide a certain amount of water to our population free of charge. One person needs 180 litres of water per day. Municipalities should not be trading firms but public sector service providers. A person can survive on bread only, but should a person who cannot afford to buy water die?”

The prosecutor, Velihattin Erdemir said Özgüven’s “offense” served the conservation of water and did not cause any public harm. He noted that any water consumption exceeding 10 tons was being charged.

The case was initially opened upon a complaint filed by the Chamber of Accounts.

Dikili is a coastal town and a district of ?zmir Province in the Aegean Region of Turkey. It is a popular summer resort.

Özgüven’s policies drew the attention of the radical/progressive think-tank Transnational Institute in a paper published in January, 2009 and titled “Progressive Public Water Management in Europe—in search of exemplary cases.”

“The introduction of this new tariff system led not only to a social model of water distribution, but also to water savings in a region with scarce natural resources,” the paper’s authors noted.

Water privatization has been a controversial issue in Turkey, where more than a dozen people were arrested in the northwestern city of Edirne in 2008 on corruption charges related to the transfer of the city’s water and waste-water treatment facilities to a private-sector firm.

The controversy extends well beyond Turkey, and prompted a conference in Brussels in January 2008 by the Transnational Institute’s Reclaiming Public Water Network, which was called to explore alternatives to privatization and commercialization of water delivery in Europe.