Among the only-in-San Francisco events in any year, the Wreath Laying and Commemoration of the 1906 Great San Francisco Earthquake and Fire is among the most dignified. 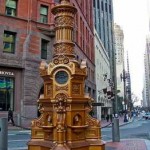 Conducted each year at Lotta’s Fountain, there is the moment of silence for those who died in the quake and fires. There is the Laying of the Wreath. There is the siren at 5:12 a.m., at exactly the time the earthquake struck.

A San Francisco environmental historian says that because of the advent of Daylight Savings Time in 1966, the ceremony goes off one hour too early, and that the commemoration therefore is “a major distortion of historical reality.” 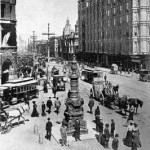 In an e-mail to San Francisco columnist Leah Garchik, David Schmidt notes the April 18 ceremony is “in complete darkness, one hour too early, due to daylight-saving time.”

Instead of darkness, San Franciscans who were rattled by the 7.9-magnitude quake along the San Andreas Fault, looked out upon a city lit by the early, gray civil light of dawn.

Schmidt says that he has contacted the mayor’s office about it, and before that Taryn Sapienza, who used to organize the ritual. He says Sapienza (who can’t confirm this because she died a few years ago), told him that the hour is off “because there’s too much traffic on Market Street at 6:12 a.m. daylight time (the equivalent of 5:12 a.m. standard time), with many construction projects already under way at 6 a.m.”

This year, since April 18 falls on a Sunday, he says, there’s no reason not to mark the real time at the real time. This is important, he stresses, “because if you’re going to have an anniversary commemoration at the very minute of the quake so that people can remember that moment just as it really was … you shouldn’t be holding your commemoration in the midnight darkness when the quake actually took place in the just-before-dawn light of day. Any quake survivor 10 years ago could have told you that. … This is a major distortion of historical reality.”

This year, at least two survivors are expected to attend the ceremony. (Another survivor, Nancy Mary Page, died last week at 105 at her home in Colorado.)

The celebration, which takes place each year with the dwindling number of survivors of the quake, generally begins with a moment of silence and wreath laying and then is followed by a visit to just north of Dolores Park at Church and 20th streets to paint in gold the fire hydrant that saved the Mission District churches in 1906.

Finally, there is Lefty O’Doul’s annual ’06 Quake Survivor’s Bloody Mary Breakfast
on Geary St., followed by a screening of the film “1906” at the Westin St. Francis Hotel. 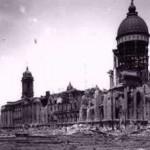 The most widely accepted estimate for the magnitude of the earthquake is  7.9—much more violent than the 6.9-magnitudes registered by the 1989 Loma Prieta Earthquake and the 2010 Haiti earthquake. The epicenter occurred offshore about 2 miles from the city, offshore, near Mussel Rock.

It ruptured along the San Andreas Fault both northward and southward for a total of 296 miles. Shaking was felt from Oregon to Los Angeles, and inland as far as central Nevada.

One important characteristic of the shaking intensity was the clear correlation of intensity with underlying geologic conditions. Areas situated in sediment-filled valleys sustained stronger shaking than nearby bedrock sites, and the strongest shaking occurred in areas where ground reclaimed from San Francisco Bay failed in the earthquake.

Sunday will mark the 104th anniversary of the famed San Francisco Earthquake of 1906
Examiner.com