Seething members of the Xákmok Kásek indigenous community in Paraguay asserted before an international court this month that they were slowly being squeezed out of existence. 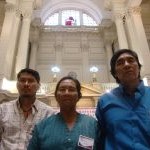 In court, at last

Their appearance was just one more step in a process that began in 2001.

Arguing for the right of indigenous communities to collective ownership of their land, three members of the Xákmok Kásek asked the Inter-American Court of Human Rights to return 26,440 acres of land in western Paraguay. They argued that they need their traditional land to maintain their way of life, which depends on hunting, fishing and gathering wild fruits. 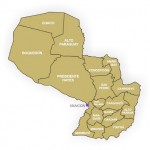 The land in dispute is in the west-central province of Presidente Hayes—which has one of the highest concentrations of Amerindians in the country. Over the years, it was gradually sold off to ranchers, and indigenous people were crowded onto increasingly smaller areas of land.

López said he has spent 35 of his 48 years fighting for the land rights of his community, which has shrunk to 61 families made up of just under 300 people.

“Many have moved away because it’s so hard to live like this, as farmhands for the ranchers, without clean water or health services,” said Maximiliano Ruiz, an indigenous teacher who testified before the Court.

The Xákmok Kásek live in a vast area of dense, scrubby forest that covers western Paraguay and parts of Bolivia and Argentina. Their community is 230 miles from Asunción, the capital.

The Xákmok Kásek belong to the Sanapaná people, one of the 20 native groups in Paraguay. The country’s population is  6.7 million, and indigenous people number just over 108,000.

They live in rudimentary huts and have problems with access to clean water, medical care and education. López said the nearest health center is over 60 miles away, while the small school, donated by a private institution, is just a thatched-roof open-sided construction.

Conditions were such that the Inter-American Commission on Human Rights backed their claim in the court, which heard three cases during April in its session in Lima, Peru. It is an autonomous organ of the Organization of American States (OAS).

Along with the Inter-American Court of Human Rights, it is one of the bodies that comprise the inter-American system for the promotion and protection of human rights.

The IACHR is a permanent body, with headquarters in Washington, D.C.,  and meets in regular and special sessions several times a year to examine allegations of human rights violations in the hemisphere.

In its brief before the court, the commission argued that the Xakmok Kásek has its own cultural identity and particular, and for nearly two decades has sought to obtain recognition of their right to live in at least part of traditional or ancestral territory.

“Its members are in a state of extreme vulnerability,” the commission said, “especially children and elders. They are prevented from developing their traditional economic activities and living in their homeland, seeking justice at the international level in his country have been denied.”

The Xákmok Kásek brought their case before the Inter-American Commission on Human Rights in 2001, with the support of lawyers with Tierraviva, a non-governmental organization that is helping the community with its land claim.

The Tierraviva attorneys said they expect the court to hand down its ruling in July 2011.

Proceedings Of Xakmok Kasek Community Of Enxet-Lengua People Against The Republic Of Paraguay: Interamerican Court Of Human Rights
Indigenous Peoples Issues and Resources