Cul-de-sac communities can be bad for your health. 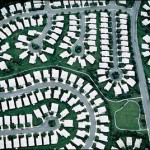 Icons of suburban development and land-use since World War II, these communities contribute to higher rates of air pollution and obesity than neighborhoods with well-connected street grids, according to a recent Harvard Business Review report.

The article cited a study (PDF format, 332 kb) of King County, Wash. conducted by Lawrence Frank, Bombardier Chair in Sustainable Transportation at the University of British Columbia, that found a 26 percent reduction in vehicle miles per day for those who live in high-density areas.

VOCs and NOx can combine to form ozone, which has been linked to respiratory illness.

The researchers found a 21 percent decrease in NOx per person per day between the highest street-intersection density neighborhoods and the lowest.

There is about a 24 percent lower carbon dioxide emission rate per capita in King County areas with optimal land-use versus those rated with the worst.

The climate-changing gases have been linked to lower fresh water levels from Cascades Range snowpack, and may affect future salmon populations in the area.

But increased time spent in a vehicle also means less time to walk or exercise.

A second report (PDF format 16.3 mb) by Frank and his colleagues focused on Atlanta. 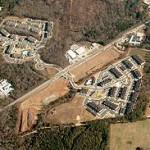 It found that “every additional hour spent in a car each day translated into a six percent greater chance of being obese.”  The data was obtained from a survey of about 18,000 individuals.

The Atlanta study also showed a five percent decrease in the chances of being obese for each additional kilometer walked everyday, whether by choice or as a part of routine.

Residents in Atlanta were 2.4 times more likely to get the recommended level of daily activity to maintain health in highly “walkable” areas, according to the report.

The Unintended Consequences of Cul-de-sacs