A Turkish court this week sentenced the former editor of the only Kurdish-language daily to 166 years in prison, convicting him of spreading propaganda for the terrorist organization PKK (the Kurdistan Workers’ Party). 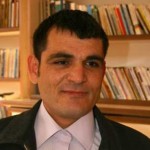 Reporters Without Borders, based in Paris, immediately condemned the sentence, while defense lawyers for editor Vedat Kursun said they would appeal.

“This sentence is absurd,” Reporters Without Borders said on its website. “We support Kursun’s colleagues, who say this was a political trial. We regret the attitude of the Turkish judicial authorities, who are deliberately violating the rights that are protected by the European Convention on Human Rights although Turkey is a signatory.” 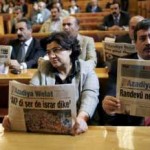 In the pages of Azadiya Welat daily, where Kurson was editor, the decision was described as “illegal” and “politically” motivated. The newspaper urged rights institutions to react to the decision.

Kersun, who was in the courtroom in Diyarbakir, Turkey, denied the charges, saying, “Our coverage is not different to other newspapers in this country. We always aimed to serve peace. We never published stories that would have incited the public to violence.”

Kersun has been held in custody since February 2008. The court gave him 12 years and eight months, the upper limit for charges of “membership of an organization.” On top of that, the court convicted him 103 counts of spreading propaganda for an illegal organization. 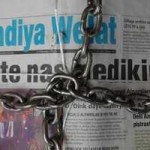 The PKK is a Kurdish separatist organization which since the late 1970s has been fighting an armed struggle against Turkey for Kurdish independence. It is listed as an international  terrorist organization by a number of states and organizations, including the United States, United Nations, NATO and the European Union.

Said Reporters Without Borders: “In the final hearing, Kursun’s lawyers tried to make the jury understand that the conviction requested by prosecutor Yavup Var violated laws protecting freedom of expression. They also insisted that Turkey should respect the undertakings it has given to the Council of Europe.

“Kursun had been facing a possible sentence of 525 years in prison. Although the sentence he was given was much less, it is no less absurd and undermines the credibility not only of this court but also of Turkey’s entire judicial system.”

VIDEO: The offices of the Kurdish daily newspaper, Azadiya Welat

Kurdish journalist jailed for 166 years in Turkey
Agence France-Presse via Vancouver Sun, May 13, 2010