Not many people have heard of Fort Chipewyan, Alberta, nor the Athabaskan Tar Sands. Not these days, anyway, with the Deepwater Horizon disaster spewing oil into the Gulf of Mexico. 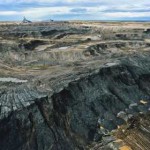 But in Fort Chipewyan, a hamlet of 1,007 people and commonly called, simply, “The Fort,” the ongoing effects of bitumen oil extraction—including continuous charges that cancer-causing carcinogens are finding their way into the local food supply—continue as the top news of the day.

“The Fort” is located on the western tip of Lake Athabasca, adjacent to Wood Buffalo National Park in the eastern extremity of northern Alberta. It is near the Alberta Tar Sands, also known as the Athabaska Tar Sands—a huge area in which a sticky, tar-like substance known as bitumen seeps to the surface naturally.

Mining technology allows this substance to be extracted and processed into synthetic oil.

However, in June, a Paris-based monthly journal described the area as “an immense toxic cesspool.”

The report in Le Monde Diplomatique echoed a 2007 report by Kevin P. Timoney, an ecologist with Treeline Environmental Research, who concluded that the town’s treated drinking water was safe, but high levels of arsenic, mercury and polycyclic aromatic hydrocarbons were found in fish, which many people in Fort Chipewyan, especially members of its native community, rely on for a substantial portion of their diet. 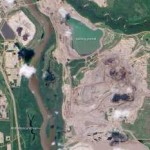 The newest report, from Le Monde Diplomatique, charged that around the Athabasca lake region the cancer rate is becoming alarming: 30 percent above the Albertan provincial average. The culprit, said the report, is suspected to be the toxic reservoirs where the effluence from the oil industry’s operations is collected.

In 2007, Howard May, a spokesman for Alberta’s Department of Health and Wellness, responded to Timoney’s report in an e-mail: “There is nothing really new in these allegations, we have been looking into them for some two years now.” He wrote that the government investigation has found “no higher incidence of cancer in Fort Chipewyan than the rest of the province, and we stand by that analysis unless and until we are provided with further evidence.” 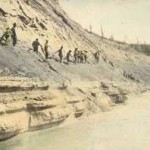 In First Nation days, people used bitumen to waterproof their canoes, but other than that, the Tar Sands (not really tar at all), had no other human uses.

Then along came the oil companies, which began a laborious extraction process that has since left the boreal forest crisscrossed with roads and the surface with a landscape that appear to be a series of open pit mines.

Commercial production of oil from the Athabasca oil sands began in 1967, when Great Canadian Oil Sands Limited (then a subsidiary of Sun Oil Company, then an independent company known as Suncor Energy) opened its first mine, producing 30,000 barrels per day (4,800 m3/d) of synthetic crude oil. Development was inhibited by declining world oil prices, and the second mine, operated by the Syncrude consortium, did not begin operating until 1978, after the 1973 oil crisis sparked investor interest.

However, the price of oil subsided afterward, and although the 1979 energy crisis caused oil prices to peak again, introduction of the National Energy Program by Pierre Trudeau discouraged foreign investment in the Canadian oil industry. During the 1980s, oil prices declined to very low levels, causing considerable retrenchment in the oil industry, and the third mine, operated by Shell Canada, did not begin operating until 2003. However, as a result of oil price increases since 2003, the existing mines have been greatly expanded and new ones are being planned. 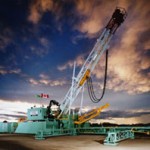 In 2006, Chevron Canada Limited acquired oil sands leases in the Athabasca region. The leases cover more than 85,000 acres and contain an estimated 7.5 billion barrels of oil in place, according to the company. Chevron Canada holds a 60 percent interest and is project operator. Other project participants include Shell Canada Limited (20 percent) and Marathon Oil Canada Corporation (20 percent).

The massive-scale extraction of “black oil,” underway for years now, seeks to suck out the remaining 170 billion barrels beneath the forest, of which huge swaths are destroyed to get to the oil underneath. Large quantities of fresh water are used to “steam out” the viscous petrol from the tar-like sands, transforming the earth into toxic sludge and giving off large amounts of C02 gas.