Former garment workers in Thailand and Argentina have joined forces to launch an anti-slave labor clothing line called No Chains. 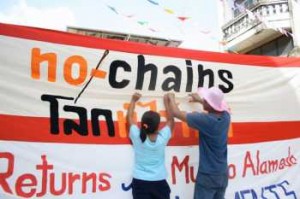 Workers prepare for the Thailand launch

The graphic t-shirts, debuted on June 4, are intended to raise awareness of the exploitation of sweatshop workers, and to demonstrate the possible success of cooperation and fair labor practices.

Buenos Aires cooperative La Alameda and Bangkok’s Dignity Returns teamed up last year at a Hong Kong conference. Both cooperatives are comprised of mostly women who were laid off from garment factories.

La Alameda, which consists largely of undocumented Bolivian immigrants, began as a community kitchen during the 2001 economic crisis in Argentina. Dignity Returns formed when workers were laid off without pay after the closing of a Bed Bath & Beyond factory in 2003.

Together, the two groups created the No Chains line as a “cry of support for decent work and a way to prove that high quality clothing can be produced without having to enslave workers,” said La Alameda’s Gustavo Vera in an IPS report.

The No Chains website explains that the alliance of La Alameda and Dignity Returns is “the natural consequence of the common values and histories of the two cooperatives, united now by one objective: to break the chains that bind us.” In upcoming years, they plan to involve twenty to thirty additional cooperatives from other developing countries. 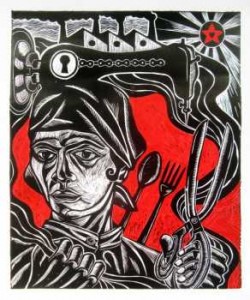 The currently available t-shirts are emblazoned with images of handcuffs and drawings of chains being removed from a man’s body. Though both cooperatives previously sold unique items, No Chains held a global contest for the new designs, and the workers chose six favorites.

The cotton shirts cost between 12 and 15 dollars. The cooperative’s next project will be the production of other clothing items.

Workers in both groups formerly made products for companies such as Gap, Nike, Puma, and Bensimon. In Argentina, authorities confiscated faulty machines that were responsible for the death of six laborers, yet have not penalized the factory owners. In Thailand, workers were forced to take amphetamines so that they could work longer shifts, and their wages were lowered if they spoke about their exhaustion.

“This is the first time that workers coming from the world of slavery are coming together to denounce exploitation and prove that it’s possible to produce clothing under decent working conditions,” said Vera.

The launch parties in the two countries occurred simultaneously, and the collectives were united by way of video conference. In Thailand, the all-women workers’ band Paradon provided the soundtrack to the celebration.

‘No Chains’ for garment workers
Committee for Asian Women, April 26, 2010