Though attempts to build symbolic bridges between Armenia and Turkey have effectively ceased, plans to reconstruct a literal one are underway.

Architects from both nations are gearing up to rebuild a 10th century bridge that crossed the Akhurian River and connected the Turkish border to the Armenian medieval capital of Ani. It was located on the Silk Road. 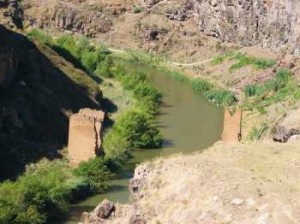 Remainders of the medieval bridge

“It is not the two river banks that the bridge is going to link together, but the two countries, so that people—representatives of both nations—can slowly start communicating,” said Armenia’s Union of Architects Chairperson Mkrtich Minasian in a Eurasianet report.

The project was suggested earlier this year by Armenia’s International Council of Monuments and Sites (ICOMOS), in conjunction with the Economic Policy Research Foundation of Turkey (TEPAV). TEPAV submitted the proposal to the Turkish government for approval and purportedly received it, though Turkish officials did not publicly comment on the plan.

Although the architects and organizers sought a government go-ahead, those involved in the project say the rebuilding of the bridge is a strictly unpolitical endeavor. In a Hurriyet Daily report, ICOMOS-Armenia’s Chairperson Gagik Giurjian said, “We can collaborate with non-governmental organizations away from the shadow of politics We do not need to wait for the opening of borders for a peace passage.”

He told Eurasianet, “?ne shouldn’t wait for the normalization of diplomatic relations before starting to restore cultural heritage.”

Others are skeptical about the initiators’ motives.

“This is all in Turkey’s interest, in order to show the world and say, ‘See how kind and generous we are. We are restoring Armenian monuments,’” said Armenian citizen Vardges Gasparian. 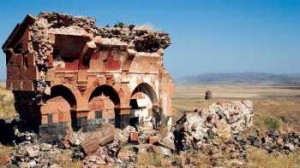 Prior to World War I, the recently-discovered Ani, or “City of 1,001 Churches,” was an excavation and research site. Ani, which at one point was connected to neighboring states by five stone bridges, was looted and destroyed during the Armenian Genocide, and eventually returned to Armenian control when Turkey surrendered.

Giurjian said that, regardless of possible political motives, the reconstruction would be beneficial for all. “We too win from this, because our cultural heritage is preserved rather than destroyed,” he said.

Turkey has worked to rebuild a handful of destroyed Armenian sites over the past few years, including Ani. Armenian architects, however, have said that they have been prohibited from helping with the restoration of their ancient city.

An official timeline and commencement date have yet to be set for the rebuilding of the bridge, but a team of architects has been established and the United Nations Educational, Scientific, and Cultural Organization has pledged support.

A spokesperson from TEPAV said the project “should increase the contacts between the two peoples and enable them to open the borders in their mentalities.”

Armenia: building a bridge to Turkey—literally, this time
Eurasianet, June 18, 2010

Armenia and Turkey to rebuild bridge on border
Armenians.net, March 1, 2010

Reconstruction of bridge between Armenia and Turkey matter of time
Panorama, May 11, 2010

Ancient bridge in historical city of Ani to be repaired
Asbarez, May 7, 2010