The sight of a celebrity wearing a particular pair of heels causes  an increase in brain activity for women, a recent study concluded. 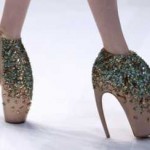 “The results of our study are consistent with the general finding that celebrities are more effective endorsers than non-famous individuals,” the study reported.

The Dutch researchers, led by Mirre Stallen from the Erasmus University Rotterdam in the Netherlands, examined 20 women, all in their mid-20s.  The participants were paid $32 to look at forty photographs of famous and non-famous women and 480 photographs of shoes.  The study, “Celebrities and Shoes on the Female Brain: The Neural Correlates of Product Evaluation in the Context of Fame,” was published April in the Journal of Economic Psychology.

“Choosing shoes as products was optimal for two reasons,” the study reported.  “First, they are present in a large variety in an everyday shopping context. This is important to prevent any effects due to specific outlying items.”

“Second, as women in general (and not celebrities only) are regarded to be experienced users of shoes, the presentation of shoes as products should prevent any confounding effects of expertise on the fame manipulation.” 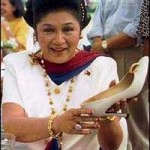 Former first lady Imelda Marcos had her share of shoes

The researchers recorded the brain activity of the participants with a functional magnetic resonance imaging (fMRI) scanner.  As the women were being scanned, they were also shown photographs of different products, and images of famous and non-famous women.  The results showed an increase in activity in the orbitofrontal cortex, which is in the frontal lobes of the brain and involves value reinforcement and decision-making.

“The enhanced memory performance for items that were encoded in the context of a famous individual can neither be explained by increased attractiveness of the celebrity nor by a higher level of perceived expertise, but only by the persuasiveness of fame itself.” 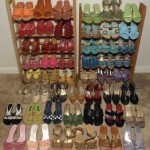 A rainbow of shoes

“Shoes of which subjects indicated they were not owned, received higher purchase intentions if they were presented together with a celebrity than when they were shown with a non-famous female.”

Celebrities and Shoes on the Female Brain: The Neural Correlates of Product Evaluation in the Context of Fame (full study)