Swiss voters in November will decide whether to activate a right-wing proposal to deport all foreign criminals in the country.

The Swiss People’s Party (SVP) introduced a people’s initiative—which garnered more than double the required 100,000 signatures—in 2007 that suggested crime in Switzerland is due largely to the immigrant population. It advocated “for the expulsion of foreigners who commit crimes.” The controversial campaign for the initiative involved posters featuring a black sheep being kicked out of the country by several white sheep. 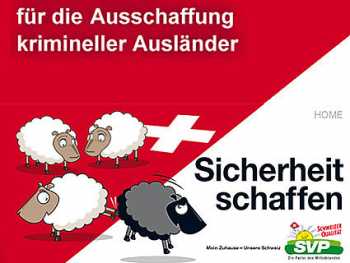 In Switzerland, parliament can either validate people’s initiatives or release an amended “counterproposal.” In June, Swiss parliament issued a counterproposal with a specific list of serious crimes that would qualify a foreigner for expulsion, such as murder, rape and armed robbery. It states that deportations cannot violate national or international law.

On the SVP campaign website, the party said that it supports only the original initiative. “(The counterproposal) opens up the way for numerous appeals and complaints. For this reason the SVP stands fully behind the people’s initiative, because only it guarantees a consistent expulsion of criminal foreigners,” wrote the party.

In November, both the initiative and the counterproposal will be on the ballot, along with an additional question asking voters which of the two they support the most, should both pass.

The SVP’s popularity has skyrocketed in recent years. In 2007, the party received the largest proportion of the national vote of any political party since 1919, and currently occupies 62 of the National Council’s 200 seats.

SVP members of parliament have been vocal in their support of the initiative. “Switzerland can’t become a land of milk and honey for foreign criminals,” said MP Walter Wobmann in an IPS report.

MP Andrea Geissbuhler said, “Most of those foreign criminals are unteachable and laugh about our system. Once they leave prison, they straightaway commit the next crime.” 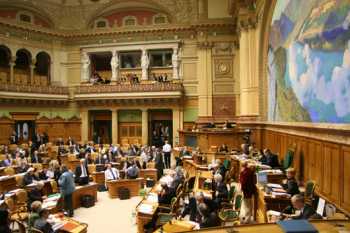 Critics of the proposal say it targets minorities and that it violates international law’s non-refoulement principle, which states that people cannot be deported to countries where they might face prosecution.

Gianni D’Amato, professor of Migration and Population Studies at the University of Neuchâtel, said that nationality is seen as the cause when immigrants commit crimes, whereas “deviance of (Swiss-born) citizens is usually explained with psychological factors.”

He estimated that the current 350-400 annual criminal deportations will double if the counterproposal passes. He said that expulsions could increase up to four times the current amount if the original initiative passes.