The number of apostles has remained constant and clearly the Middle East millieu has, too. But over the years, artists’ depictions of Jesus’ last supper have upped the ante on the portions—by a whopper-sized 69 percent. 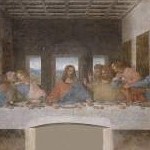 This is according to a new study out of Cornell University’s Food and Brand Lab, where a pair of scholarly brothers have teamed up to illustrate how our food habits have changed since Leonardo Da Vinci’s famous tempera painting depicting the scene.

What would Jamie Oliver say? 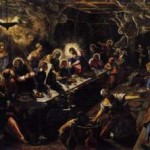 Setting aside that question for a bit, the Wansinks said on Brian’s Web site, MindlessEating.org, that the portion sizes were indexed, based on the average size of the heads depicted in the paintings.

This was aided by the use of a CAD-CAM program that allowed the items to be scanned, rotated and calculated, regardless of their original orientation in the painting. An index of 2.0 for the bread would indicate that the average width of the bread was twice the width of the average disciple’s head. 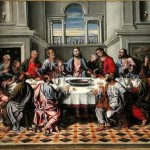 “The last thousand years have witnessed dramatic increases in the production, availability, safety, abundance and affordability of food,” Brian Wansink said in a press release. “We think that as art imitates life, these changes have been reflected in paintings of history’s most famous dinner.”

Brian Wansink is the John S. Dyson Professor of Marketing and of Applied Economics and director of the Food and Brand Lab. His brother, Craig, is a professor of religious studies at Virginia Wesleyan College, Norfolk, Va., and an ordained Presbyterian minister. 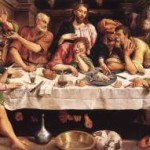 The study found that the size of the entrées in paintings of the Last Supper, which according to the New Testament occurred during a Passover evening, has progressively grown 69 percent; plate size has increased 66 percent and bread size by about 23 percent, over the past 1,000 years.

Since Leonardo, many artists have had a go at the Last Supper, including Tintoretto, William Blake, Jacopo Bassano, Girolamo da Santacroce and Valentin de Boulogne. 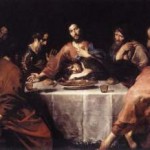 All of different takes on the meal itself, but clearly the mise en place has changed, as well as the food itself.

As for Oliver, the English chef whose reality show, “The Food Revolution,” premiered this month on American television, it’s doubtful he’d have much of a problem with the nutritional value of the food. But the portions?