Researchers at the Massachusetts Institute of Technology have discovered a process that allows them to imitate photosynthesis—a potentially critical breakthrough in the search for clean, sustainable energy.

Photosynthesis is the ability of plants to harvest the power of sunlight. It is a natural process that converts carbon dioxide into oxygen, as well as other organic compounds, especially sugars, using the energy from sunlight. Photosynthesis occurs in plants, algae, and many species of bacteria. By replicating the process, solar energy proponents hope to make unlimited amounts of “green” energy from water and sunlight alone.

The breakthrough was announced by Angela Belcher, the Germeshausen Professor of Materials Science and Engineering and Biological Engineering at MIT.

Writing in the current issue of Nature Nantechnology, Belcher said, “Our results suggest that the biotemplated nanoscale assembly of functional components is a promising route to significantly improved photocatalytic water-splitting systems.” 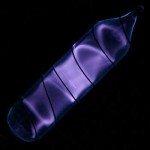 Belcher and her team took a harmless virus called M13. They engineered it so that one end carries a catalyst—iridium oxide. Bound at the other end are light-sensitive pigments, zinc porphyrins. The porphyrins capture light energy, and transmit it along the virus, acting as a wire, to the other end, activating the catalyst. That process splits water into oxygen and the constituents of hydrogen, a proton and electron.

“The role of the pigments is to act as an antenna to capture the light. and then transfer the energy down the length of the virus, like a wire,” Belcher said in her paper. “The virus is a very efficient harvester of light, with these porphyrins attached.”

For now, a prototype device that can carry out the splitting of water into oxygen and hydrogen should be able to be ready in two years, according to Belcher. 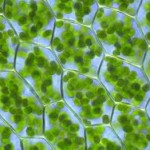 And there’s another problem.  For now, the process extracts the oxygen just fine, but the hydrogen atoms get split into their component protons and electrons. In the second phase of the project, Belcher and her team will combine these hydrogen atom components back into proper atoms and molecules. They also need to find a cheaper catalyst.

According to Thomas Mallouk, the DuPont Professor of Materials Chemistry and Physics at Pennsylvania State University, for this process to actually be cost-competitive with other approaches to solar power, it has to be at least ten times more efficient than natural photosynthesis, be repeatable a billion times, and use less expensive materials.

But for now, the really hard part seems to be over.

GM viruses offer hope of future where energy is unlimited
Breakthrough as US researchers replicate photosynthesis in laboratory
The Independent (London) April 13, 2010