A San Francisco Bay Area start-up has big plans to use the bay’s wind to help power a technologically advanced ferry to carry up to 400 passengers in the traffic-plagued metropolis of 7.4 million people. 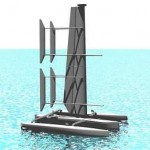 “The San Francisco Bay is blessed with consistent, powerful winds, and the Bay Area has a reputation for embracing new technology and being at the forefront of change,” said Jay Gardner, co-founder of Wind+Wing Technologies, based in Napa, Calif.

“As the need and drive for sustainable energy, renewable resources and green transportation heightens every day, we plan to take wind-powered transportation to the next level by making it available to Bay Area commuters.

“Our proposed wind assisted ferry is not only possible, but could be a perfect complement to that gravity assisted system, the cable cars, in a more energy efficient San Francisco Bay area transportation system.” 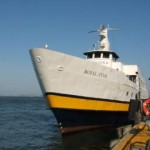 Many ferries burn up to 70 gallons of diesel per hour. While the wind assisted boats still would have engines, Gardner said they would cut fuel costs by 40 percent..

He plans to build ferries with tall, solid sails, using the bay’s strong winds to help haul commuters across the waves. The sails are made of carbon composite materials and would resemble aircraft wings more than the standard rigging of sailing vessels.

Gardner said he has signed up boating engineers Morrelli & Melvin Design & Engineering of Huntington Beach (Orange County) to work on the vessel’s design.  Building the “wind-assisted” ferry could cost between $3 million and $9 million, he said.

Initial designs have a vessel that features two sails that resemble aircraft wings, only vertically positioned on a single-deck catamaran hull.

In a statement from the company, Gardner said Wind+Wing has been in communication with the Bay Area’s three major ferry operators and wants to present formally its plans to develop a demonstration vessel and eventually a public passenger ferry. The operators, Blue & Gold Fleet; Golden Gate Bridge Highway and Transportation District and the Water Emergency Transportation Authority, have expressed interest in the project, he said.

San Francisco Bay has been served by ferries of all types for over 150 years. Although the construction of the Golden Gate Bridge and the San Francisco – Oakland Bay Bridge led to the decline in the importance of most ferries, some are still in use today for both commuters and tourists.

Modern ferry service on San Francisco Bay began in 1968 when the Red and White Fleet introduced ferry service from Tiburon to San Francisco. Many new services have started since then, encouraged by deteriorating traffic conditions and the occasional natural disaster, such as the 1989 Loma Prieta earthquake. 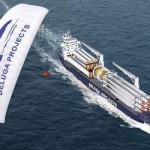 Meanwhile, Beluga Group, a German project and heavy-lift cargo vessel operator, uses what’s called a “towing kite” system aboard its MV Beluga Skysails to haul cargo. It uses a 160-meter sail designed by by the Hamburg-based SkySails GmbH & Co. Beluga Group says use of the sail has reduced fuel consumption by 20 percent.

One thought on “Got wind? Power up that ferry!”