People in the Kakamega Forest in western Kenya have found a way to save their shrinking woodlands and make a living at the same time, all on the wings of a butterfly. 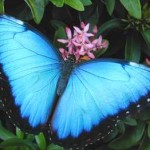 According to the Kenya Forest Service, butterfly farming, primarily by women, is now a $100,000-a-year business in the forest, which is generally considered the eastern-most remnant of the lowland Congolian Rainforest of Central Africa.

Kakamega Forest has more than 70 percent of Kenya’s butterflies and more than 500 different species. Since butterfly farming began in 2001, it has turned out to be a solid business for the numerous communities around the forests, earning farmers the equivalent of over $100,000 (U.S.) annually said the forest service in its latest annual report. 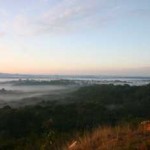 In the butterfly trade, the insects can be exported live, as pupae, or dead, as top-quality collector specimens. Farming has the best chance of economic success when the species farmed is highly local, since species of limited range are likely to be rarer and thus more valuable. More common butterflies are also collected en masse for decorative uses.

The Kakamega Forest, with its wide range of species, has turned into a bit of a gold mine.

Benjamin Okalo, director of the Kakamega Environmental Education Program, said in an interview with IPS News,  “The butterfly business is booming. A farmer needs only two butterflies to get a thousand pupae and that will be over $950 in a month—much more money than what one can earn from the chicken or egg selling business.” 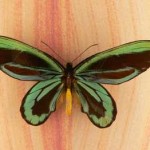 The Kakamega Forest itself is another example of the ravages a modern economy can cause. In 1820, the woodlands were about 593,000 acres. Today, because of deforestation for lumber, charcoal and farming, the forest has shrunk to 56,834 acres.

The region is said to be one of the most densely-populated rural areas in the world, and pressure on the forest resources is considerable. The German funded project BIOTA East has been working in the forest since 2001, when forest inventories for all sorts of life forms were performed. The aim is to find strategies for a sustainable use of the forest.

Butterfly farming is just the ticket, according to some. 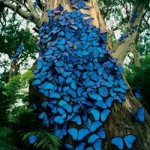 At one time, butterflies were collected exclusively as dead, “pinned” specimens. Victorian explorers trekked up mist-shrouded tropical mountainsides, returning with insects the size of dinner plates and the color of sapphires and emeralds.

As with stamp collecting, the object was to obtain examples of as many species as possible, and passionate collectors would pay dearly for especially rare or eye-popping specimens.

The live and decorative markets use common kinds of butterflies. Specialists, on the other hand, want rarities. A perfect specimen of Queen Alexandra’s Birdwing, Ornithoptera alexandrae, arguably the world’s most rare species and found only on the island of Papua New Guinea, could fetch thousands of dollars.

Just What Is a Butterfly Farm?
BioBulletin

One thought on “Save the African forests; be a butterfly farmer”