During stressful times, girls might turn to ice cream and chocolates for comfort.  But, according to a study by the University of Wisconsin-Madison, something else can comfort them during times of stress: their mother’s voice. 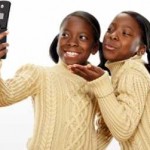 The report, published in the journal Proceedings of the Royal Society B on May 12, studied the behavior and oxytocin levels of 61 elementary-aged girls who were placed in stressful situations.  The girls, whose ages ranged from 7-12 years old, underwent the Trier Social Stress Test for Children, and were asked speech and math-related questions in front of total strangers.  As a result of the questions asked, researches observed the girls’ cortisol (stress hormone) levels rise as they became more stressed.

According to  Leslie Seltzer, Ph.D., a biological anthropologist who led the study, girls were chosen because oxytocin is considered a “female” hormone involved with early age bonding.  “Furthermore, girls tend to be more anxious in general than boys, and so they make good test subjects for how stress regulation may work,” Seltzer told Newsdesk. 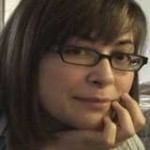 The study took place over two years and each session lasted 2.5 hours.

Dr. Seltzer and her team also recorded the girls’ oxytocin levels after they answered questions in front of the strangers.  For 19 of the girls, they were comforted in person by their mothers with a hug, whereas 20 girls talked to their mothers on the telephone.

The remaining group of 22 girls did not have their mothers present nor were they able to speak with them.  They watched a neutral film called “March of the Penguins.”

“Nature documentaries are pretty relaxing. Some of our subjects fell asleep during the film,” said Seltzer. 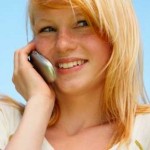 “The children who got to interact with their mothers had virtually the same hormonal response, whether they interacted in person or over the phone,” said Seltzer.  “It was understood that oxytocin release in the context of social bonding usually required physical contact.  But it’s clear from these results that a mother’s voice can have the same effect as a hug, even if they’re not standing there.”

“Apparently this hormone, oxytocin, reduces stress in females after both types of contact, and in doing so may strengthen bonds between individuals,” she added, referring to the girls who were comforted in person and over the telephone by their mothers.

The hormone levels were tested through urine (for oxytocin) and saliva (for cortisol) samples taken from the girls. 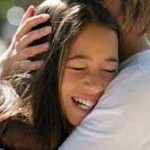 And, what about women and girls who do not have mothers or strong relationships with their mother?

“We aren’t sure since we didn’t explicitly test this, but we do know that kids who have been adopted fairly late from impoverished orphanages tend not to release oxytocin when they engage in physical touch with their adoptive mothers,” said Seltzer, who referenced a study conducted by Dr. Alison Wismer Fries and Dr. Seth Pollak, a psychology professor and director of the university’s Child Emotion Lab at the Waisman Center.

“This is an important finding because we’ve long known that neglect during early life experiences can compromise a child’s ability to form healthy, strong relationships later on.”

VIDEO: A mother’s voice is soothing

Royal Society Publishing Proceedings B, May 12, 2010

One thought on “Study: A mother’s voice does wonders for girls”