An Australian national park just got a little more green: it built a new bike pathway with recycled printer cartridges. 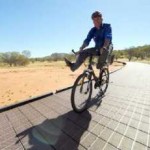 The Simpsons Gap Bicycle Path stretches 10.5 miles inside the West MacDonnell National Park.  The pathway was made with recycled plastics and printer cartridges.  The national park is located in the central part of Australia, and is over 1,200 miles away from Melbourne.

According to the Northern Territory government, the project was completed by local contractors for $330,000 and is part of a tourism stimulus package.

“Here at Simpson’s Gap repairs and upgrades to the Bike Path Bridge are now complete, leaving us a safer bridge for riders with a great natural aesthetic,” said Parks and Wildlife Minister Karl Hampton.  “In keeping with our government’s commitment to sustainable development, the bridge is made from recycled plastic decking, saving landfill, trees and ensuring a longer life with less maintenance.” 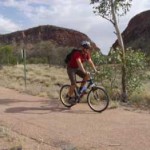 “Every year more than 120,000 people visit the magnificent West MacDonnell National Park and by investing in our parks we are able to ensure visitors have a unique experience while we protect our environment.”

According to the Australian National University, over 80 percent of used toner cartridges are thrown in landfills.  They also report that Australians throw away 18 million cartridges every year.  Currently, there is a program called “Cartridges 4 Planet Ark” in Australia.  The organization that initiated the recycling program, Planet Ark, released a research study in April about the continent’s recycling habits. 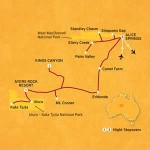 “The research found more than 90 percent of Australians correctly dispose of everyday household recyclables but when it comes to recycling e-waste (electronic waste) such as printer cartridges, almost 50 percent of people are getting it wrong,” said Planet Ark’s Campaigns Manager, Brad Gray. “It’s really encouraging that most Australians recycle their paper and plastic packaging but when it comes to e-waste recycling we still have a long way to go.”

“Printer cartridges are complex items which are unable to be recycled alongside everyday household waste,” added Gray. “When we put the wrong items in a household recycling bin, we contaminate the entire contents of the bin and reduce the effectiveness of the whole recycling process.” 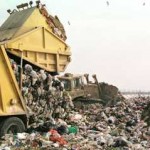 Are there cartridges at this landfill?

According to Planet Ark, they can also process and recycle cartridges.  Other cartridges are returned to the original equipment manufacturer to process or recycle at a different location.  The other materials kept are used to make aluminum cans or park benches.  “Many of the components that make up a printer cartridge, such as steel, plastic and ink, are reused to make new resources such as fridges, park benches, rulers, pens and more,” reported Planet Ark.

What Happens To The Printer Cartridges?

Australia’s recycling behavior under the spotlight

Recycle and use refilled or remanufactured toner cartridge

Making the West Macs Even Better

One thought on “Recycled ink cartridges used for bike pathway”