Controversy seized the blogosphere in mid-July when Vaseline introduced a Facebook application to promote a line of skin-whitening products for males in India.

The “Transform Your Face on Facebook” tool allows Indian social networkers to digitally lighten their skin in photographs. If they like what they see, they can purchase the face cream that produces the same effect in real life. 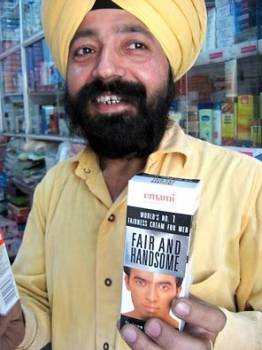 “The response has been pretty phenomenal,” said campaign spokesperson Pankaj Parihar in an Adelaide Now report.

Skin-whitening is a major industry in India. Research agency Nielson estimated that it is worth $500 million and is growing rapidly. Originally, lightening products were designed exclusively for women, but in 2005, Indian company Emami introduced the popular “Fair and Handsome” skin cream for men. L’Oreal, Revlon, Garnier, and other foreign cosmetic companies quickly caught on to the trend.

According to Nielson, sales of men’s products increased by 25 percent last year, and women’s by 17 percent.

“It’s all lower-middle-class men who want the product now,” said Indian pharmacist Ajay Gupta in a Washington Post report last year. “What it really means is that the young and up-and-coming Indian male wants to look fair and therefore rich.”

In the past, higher castes in India were associated with fairer skin tones. The rich aimed to emulate their British colonial rulers. Last year, a Vaseline slogan promised the use of the company’s “Lightening Body Milk” would result in “an Aryan glow from head to toes.”

Skin tone is considered a make-or-break trait among many young Indians looking for romance. In a poll by the online dating site Shaadi last year, people from three Indian states chose skin tone as the most important characteristic in a partner.

Twenty-four-year-old Ashu Kumar told Agence France-Presse, “My skin is too dark. If I don’t make it fairer, I’m worried I’ll have trouble finding a woman to marry me.”

Critics of Vaseline’s facebook application have called it racist and oppressive. 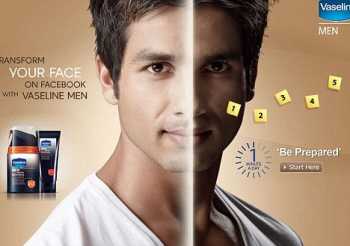 In a Wall Street Journal blog, economist Rupa Dehejia similarly questioned, “How is the use of skin-whitening creams any different from applying suntan or bronzing lotions to look tanned? Or anti-wrinkle creams to smooth skin? Or Botox to look younger?” She responded to claims that young Indians are still bound to colonial ideals by saying, “To assume that Indian and Asian consumers are somehow misinformed and brainwashed into buying these products but their counterparts in the West are behaving rationally is the real colonial mentality.”

Others insist that companies such as Vaseline are perpetuating the idea that a Western appearance is a superior one. New Dehli artist Nikki Duggal creates t-shirts that say “Dark and Lovely” and “Fair and Ugly.”

An editorial in The Hindu reminded readers, “There is no perfect formula for beauty and, hopefully, a dark skin shall not remain on the margin of the beauty page for long.”

Is Vaseline’s skin-whitening facebook app beyond the pale?
Dawn.com, July 15, 2010

Why this obsession with colour? This is not fair, certainly not lovely
The Hindu, June 12, 2010

In India, fairness is a growth industry
The Washington Post, May 4, 2008