In an effort to promote women’s human rights in the Philippines, it is now illegal to ban unmarried single mothers from enrolling in schools. 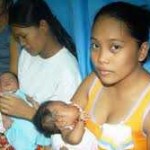 Single and unwed Filipino mothers are no longer banned from schools

The Philippine Commission on Women (PCW) and United Nations Development Programme unveiled Implementing Rules and Regulations (IRR) of Republic Act 9710, also known as the Magna Carta of Women (MCW), on July 8 in Manila.

The new rules and regulations were added to strengthen the existing MCW, which was signed last August by former President Gloria Macapagal-Arroyo.  The MCW is the country’s legal framework that protects women’s rights against discrimination.

“The presence of guidelines to ensure that the MCW is put into action is a big step in making more women and men get actively involved in overcoming gender inequalities and striving to make women’s rights real,” said PCW Chairperson Myrna Yao.

According to section 13 of the MCW, equal access must be given to unmarried women in an academic setting.

All local and statewide government agencies, private corporations, public, private and Catholic schools are subjected to the existing and new rules of the MCW.

The MCW also includes a measure which requires an increase in recruitment and training of women in the workforce.

“Within the next five (5) years, there shall be an incremental increase in the recruitment and training of women in the police force, forensics and medico-legal, legal services, and social work services availed of by women who are victims of gender-related offenses until fifty percent (50%) of the personnel thereof shall be women,” stated section 12 of the act. 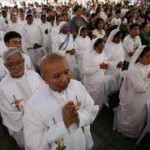 “The law would be a sham if one of its purposes is to discredit the work of women in the home, as if the time spent in bringing up children and attending to the family’s basic human needs were time unjustly taken away from the work women should be doing in some office, some factories or elsewhere,” reported the church, who is pro-life.

Healthcare coverage for abortion-related procedures is not mentioned in the MCW, except for access to abortion prevention services.  Abortion is currently illegal in the Philippines.

“We humbly propose that in opening unlimited opportunities for the development of a woman’s personality and profession, a Magna Carta of Women, to be worth its name, must first of all protect and uphold her natural calling to marriage, family life and motherhood,” the church added.

It is estimated that over 80 percent of the Philippines is Roman Catholic.

Roman Catholicism in the Philippines

Abortion in the Philippines

One thought on “Expelling unwed mothers banned in Philippines”