By Bernice Yeung | Crowdfund this with Spot.Us
Part of the Prisons & Public Health news series

Despite a year of legal sanctions and budget cuts, the California Department of Corrections and Rehabilitation takes an upbeat tone in its new annual report. 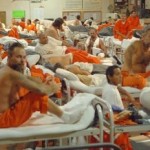 Inspirationally titled “Corrections Moving Forward” [25 mb PDF], the report opens with a letter from the CDCR secretary Matthew Cate, who writes that “in the midst of significant challenges, the California Department of Corrections and Rehabilitation (CDCR) has quietly had a remarkable string of successes in the last year. While it is easy to focus on the negative, there have been many positive developments at our agency.”

One such positive development, according to the report, is improvements to prison health care, with a new collaboration between the state and federal Medical Receiver Clark Kelso, who was appointed by a judge to oversee prison medical-care reform, and whose office the state previously tried to shut down.

As a result of the new cooperation, the report states, preventable deaths are down, medical position vacancies have increased, and the agency is working on a “comprehensive plan to improve medical facilities.”

For a deeper look, we spoke with Hadar Aviram, a criminal law professor at the University of California’s Hastings School of the Law and founder of the California Corrections Crisis blog.

BERNICE YEUNG: The CDCR annual report notes that there’s been improvements to prison health care. Is this true?

HADAR AVIRAM: You have to pay attention to exactly what the report says. It specifically names Clark Kelso, the federal receiver, and he didn’t come from nowhere. He was appointed because the state was deemed incapable of providing Constitutionally adequate care. They have made progress, but the CDCR and the governor have been fighting the receiver for years — they’ve said that [Kelso’s] proposals cost too much and that it’s coddling prisoners.

But once the three-judge panel order came down this summer and it cited overcrowding as the cause of the substandard care, one thing that happened is that the state begin to make the argument that we do have a receiver and that he’s doing a great job.

It’d be unfair to say that the state has not cooperated with the receiver at all. They are certainly working in conjunction with the receiver. One good thing that is happening is that they are overhauling the pharmaceutical system. They have made progress in construction so that there’s more space for more people. They have made attempts to hire more staff — prisons can be a difficult area of practice because they are in remote locations and it can be a difficult population to work with.

The receiver files quarterly reports on its Web site with information about improvements they’ve made.

BY: The annual report has an interesting breakdown of the CDCR’s $9 billion budget. What are your thoughts on the budget for healthcare, which will cost about $2 billion in 2009-2010?

So how come the medical service is so poor? It’s because we’re looking at an average of expenditures on medical services. The “Three Strikers” and older inmates don’t make up a large number of inmates, but they cost the state more in health care. Inmates that are 50 years or older, their medical costs double; those that are 60 years or older triple their medical costs.

And these numbers also include mental health care. And not everyone is getting preventative health care and eating organic salmon prior to incarceration. They didn’t necessarily come in with the health and well being of an average citizen.

BY: Any other notable takeaways from the annual report?

HA: Well, overcrowding is the result of a variety of things and the assumption has always been that [the state’s “three strikes” law] is the parent of all evil, but as the report shows, that’s not true. Three Strikes is problematic because it means you are housing people who are getting old and who are getting sick. And what good is it to lock up people after their peak of criminal propensity?

The report shows that the bulk of people are in prison for short prison terms — four to eight months or a year. They have short sentences or they are parole violators — that makes up quite a chunk of the pie. [Read Aviram’s detailed analysis.]

On the way out, you have to ask, why do we have universal parole?

Currently, everyone who comes out is under parole supervision. Do low-risk, nonviolent people all need to be monitored? The CDCR is currently looking into parole reform for parolees that are not dangerous, for those where it’s perhaps a waste of time and resources to supervise them so closely.

There are various stations in the process where you could implement evidence-based practices, but that would require politicians not being in political and panic mode.

4 thoughts on “California Prisons Report: A Look Inside with Hastings Scholar Hadar Aviram”