One year after the U.S. Congress gave them 11,000 acres in California’s Eastern Sierra to roar about, the federal government announced an aerial crackdown on continued snomo encroachment in nearby wilderness areas. 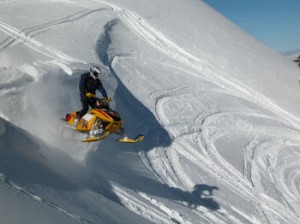 The Inyo National Forest announced the crackdown on Jan. 25, 2010, in a press release on its Web site.

An inter-agency task force, made up of local search-and-rescue teams, along with town and county governments, recommended the action in December, but waited until late January to unleash the Forest Service’s planes and helicopters. The Forest Service said it also has increased patrols on the ground.

The enforcement measure comes in the wake of heavy snowfalls in California and along the Eastern Sierra escarpment. Areas that will be heavily patrolled include Devils Postpile National Monument, Mammoth Lakes Basin and Obsidian Dome and Shady Rest cross-country ski trails.

Snowmobiles have been prohibited in designated “Wilderness and Research Natural Areas” since passage of the Wilderness Act of 1964.

In 2009, one of the first bills President Obama signed was an Omnibus Public Lands bill that contained the Eastern Sierra and Northern San Gabriel Wild Heritage Act, which gave wilderness designation—the highest level of protection and conservation for federal lands—to 472,007 acres of federal public land in California.

Opponents of the bill, which included the snowmobile lobby, won some concession in the House-Senate compromise legislation. It released over 50,000 acres of Wilderness Study Areas from further consideration as wilderness. And it created the first ever dedicated winter recreation area—11,000 acres for snowmobile use—near Bridgeport,  in northern Mono County.

For some snowmobilers, including back-country snowboarders and skiers who use the machines to access pristine off-piste mountainsides, that wasn’t enough. Many snowmobilers engage in “highmarking,” the idea of which is to “mark” pristine snow as close as possible to the top of a ridge or summit.

Riding in closed areas is both a federal and state offense, punishable by fines up to $5,000, six months in jail and possible seizure of snowmobiles.

Here’s an example of snowmobile highmarking

One thought on “Forest Service is up in the air, chasing snowmobilers”