For the second straight year, the much-loved California Brown Pelican population is experiencing a mystifying die-off. 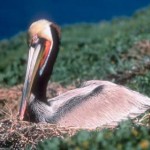 “It’s a mystery,” said Dana Michaels, a spokeswoman for the California Department of Fish and Game. Quoted in Democratic Underground, she said, “It’s tragic. It’s very sad to see these poor birds suffer,” she said “I hope we can get to the bottom of it. There’s something really endearing about pelicans.”

Indeed, the pelican is the inspiration behind one of the most oft-quoted limericks of all time:

A wonderful bird is the pelican.
Its beak can hold more than its belly can.
It can hold in its beak
Enough food for a week.
I’m darned if I know how the hell he can.

In a report in the San Francisco Chronicle and its online arm, SFGate.com, DFG wildlife biologist Esther Burkett said,

“We think it’s probably related to El Niño and the big storms. “When the ocean gets all mixed up, the fish are moving around and the birds cannot find them. The majority of birds we found were just weakened by the lack of food.” 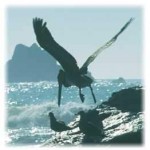 More from the Chron report:

The pelicans began turning up sick and dead in odd places throughout California and Oregon in mid-January. The wave of starving and emaciated pelicans overwhelmed the International Bird Rescue Research Center in Cordelia, which took in about 400 pelicans at its two branches. Many of the ill pelicans were waterlogged and suffering from hypothermia, problems that normally occur during oil spills.

The birds had been spending time off the coast of Oregon when a severe storm hit, driving the birds south and inland, fleeing the winds and freezing temperatures. Many of the birds recovered by rescuers showed signs of frostbite on their feet and pouches, suggesting that the birds were indeed unprepared for the unusually harsh conditions.

The pelican has had a precarious time of it in recent years, according to a report in Scientific American.

Brown pelicans are a rare endangered species success story. Once ravaged by the effects of DDT, the brown pelican was formerly protected under the U.S. Endangered Species Act. But decades after DDT was banned in the U.S., pelican populations have rebounded, and the bird was removed from the endangered list last November. The current population is estimated at around 650,000.

Here is a video from 2009 showing rescue tubs with recovering pelicans:

2 thoughts on “Pelicans dying off the U.S. West Coast”