A vast experiment in urban planning is underway in Brazil’s jungle metropolis of Manaus. 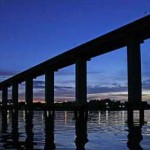 At the center of the urban expansion is the construction of a 2.2-mile bridge that is to connect the central city of the old rubber trade to industrial cities and towns across the Rio Negro—the largest left tributary of the Amazon and the largest blackwater river in the world. The Rio Negro flows into the Rio Solimões to form the Amazon River below Manaus.

The bridge is likely to have a major impact on the city, which is situated in the heart of the Amazon rainforests of northwest Brazil and whose 1.7 million people currently rely heavily on ferry services to move goods, and air transport for most supplies of perishable products. 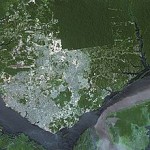 Construction of the bridge is expected to fuel significant growth in agricultural production in the municipalities on the other side of the Negro river. Manaus currently is connected to only one paved road, which runs north.

But for all the economic growth impact, critics fret that the rising land prices will drive people into protected areas such as the Jaú National Park and the Anavilhanas archipelago—keystones for the area’s eco-tourism industries.

So far, however, the professor who coordinated the project’s environmental impact study for the Federal University of Amazonas said that the construction of the bridge so far has proceeded smoothly. 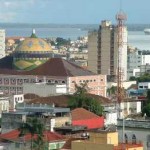 Manaus was at the center of the Amazon region’s rubber boom during the late 19th century. Its gaudy opera house, the Teatro Amazonas, still exists today; it has been restored, was used in the Werner Herzog film Fitzcarraldo, and after 90 years, presents operas once again.

Manaus is a cosmopolitan city, and, because of its location next to the Amazon rainforest, it attracts a substantial number of Brazilian and foreign tourists, who can find plenty of boat and land trips into the surrounding jungle. A great diversity of wildlife can be found even in the surroundings of Manaus.

It is also home to one of the most endangered primates in Brazil, the Pied tamarin.

Ominously, the first shopping mall in the Brazilian Amazon opened in 1991 in Manaus, which incidentally has special status as duty-free zone. In April 2009, the 227-store Shopping Manauara opened with jungle trees in the food court.

Brazilians shop where forests once stood
The Australian, May 13, 2010

One thought on “Urban planning in the Brazilian rainforest”