Rome is home to the Pantheon and the Colosseum, but last week the city added something entirely different—and trashier—to its architectural repertoire. 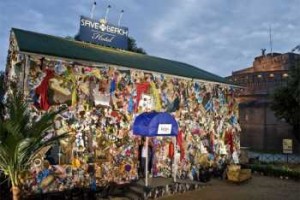 A temporary hotel, built almost exclusively from trash collected on Italian beaches, was open for business June 3-7. German artist HA Schult told The Times Online that he built the hotel as a “mirror of our time.” He sees his work as a call to action, and said, “We must change the world before the world changes us.”

Schult’s “Trash People” installation has been on display at several international landmarks, but this is his first trash building. The project was sponsored by Corona’s Save The Beach campaign, which asks Corona customers to nominate and vote on European beaches to be salvaged. It plans to recover at least one beach annually.

The hotel, which was built in the gardens of the Castel Sant’Angelo and just across the Tiber River from Vatican City, is composed of twelve tons of collected garbage, such as plastic bags, beer cans, discarded cameras, and lost clothing.

Guests included winners of a Corona contest, Danish supermodel and environmentalist Helena Christensen, and others who booked their stays far in advance of the June 3 premiere.

Christensen is a spokesperson for the Save The Beach campaign.

“I am deeply disturbed by the state of our beaches,” she said in an interview with The Times Online. She said she had “a great night” in the hotel, and commented in a BBC News report that her experience made her “really wonder what made a human being throw away (these objects) on a beach.” 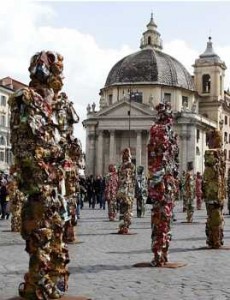 “You walk down the beach and you realize how incredibly ignorant we are with garbage,” she said in an interview with Agence France-Presse (AFP).

Schult and company are not the first to dabble in residential recycling, however. In 2008, German artists Folke Koebberling and Martin Kaltwasser built the Cambridgeshire, England Fenland pavilion from waste and unwanted doors and windows.

“With their approach, that same ‘waste’ often going to costly landfill can be rebuilt—recycled, reused, and recreated to make something not only beautiful but functional,” Cambridgeshire’s Wysing Arts Centre director Donna Lynas told Building Design Online.

Schult’s creation is the first trash hotel, and its debut coincided with World Environment Day. “We are in the trash time,” he told AFP.

VIDEO: Save the Beach interview with Helena Christensen

Among Rome’s ancient ruins, a hotel made entirely of trash
Fast Company, June 4, 2010

One thought on “Trashy hotel built from beach debris”