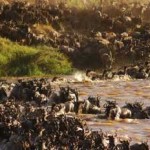 The Tanzania government approved earlier this month a new $480 million highway that will slice an east-west path through the heart of the Serengeti.

Environmental and tourism groups have blasted the plan, saying it would decimate the great wildebeest migration, a spectacle that draws tens of thousands of tourists and brings in millions of dollars to Tanzania.

Throughout the year almost two million wildebeest, zebra, antelope and their stalkers migrate from grasslands to watering holes, north to south, in order to breed and graze.

The 300-mile highway, connecting Arish near Mount Kilimanjaro and Musoma near Lake Victoria, crosses wildebeest migration paths near the Tanzania-Kenya border, according to Telegraph.co.uk.

The Frankfurt Zoological Society, a major supporter of the Serengeti, said in a press release that if the wildebeest population were cut off from critical dry-season areas their population could shrink from about 1.3 million to about 200,000. 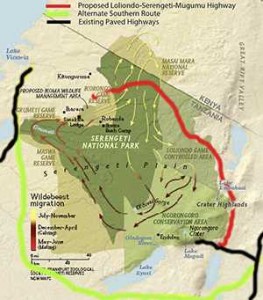 “The entire Serengeti will change into a completely different landscape holding only a fraction of its species and losing its world-class tourism potential and its status as the world’s most famous National Park – an immense backlash against the goodwill and conservation achievements of Tanzania,” the Society said.

But the government defended the plan saying that only 40 miles of the two-lane highway will traverse the Serengeti, and that section would not be paved.

“This new road will bring a great benefit to the economy of this cut-off part of the country, and ease the movement of people and goods,” Pascal Shelutete, spokesman for the Tanzanian National Parks Authority, told the Telegraph.

He added that according to a feasibility study, the highway would not impact the animal migration. 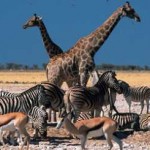 The government also said that local communities through which the highway will pass support the project.  Currently, traffic must circumvent the Serengeti on a 260-mile road around its southern border.

Construction of the highway is slated to begin in 2012, but activists say they will continue their fight.

Conservationists have proposed an alternative route that they say will serve over five times more Tanzanians than the current proposal.

The Serengeti National Park is designated as a UNESCO World Heritage Site and regarded as one of the greatest wildlife preserves on earth.

Outcry in West over plan to build road through Serengeti
The East African, June 21, 2010

One thought on “Tanzania proposes highway in the Serengeti”