Sixty-three-year-old Zumra Nuru, a longtime promoter of gender equality and religious freedom, founded the society in the 1980s. As a child, Nuru was skeptical of the inequality he observed on a daily basis. 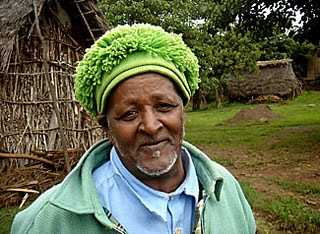 “My mother woke up long before it was dawn and started to mill grains,” he said in an Action Aid report. “My father never helped her. He rather slept until late in the morning. I questioned why things should go this way but nobody had the answer. I kept on inquiring into these and other unacceptable practices for which no one had the answers.”

In Awra Amba, which now boasts four hundred members and a long waiting list, labor is divided equally among male and female residents. Both participate in traditionally gendered tasks, such as plowing and caring for children. Each member belongs to either the development committee, or one of nine sub-committees that specialize in areas including education, care for the elderly, and agriculture.

Additionally, Awra Amba women are granted three months maternity leave and domestic violence is forbidden. In the rest of the nation, female genital mutilation and domestic abuse is prevalent.

“Our men do not oppress us and we have established a tradition of correcting one another’s mistakes through discussions,” an Awra Amba woman told the Ethiopian Students Association. 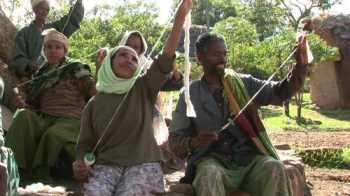 Men and women weave together

Religious observance is handled in a similarly unconventional manner. Though Ethiopia is a heavily religious nation, and all community members were previously practicing Orthodox Christians or Muslims, worship is outlawed in the commune.

“I thought, why not make one family?” said Nuru, who was raised a Muslim. “There is one God. So why not unite? Honesty and love for fellow human beings is our religion.” Community members have explained that they believe God wants them to use their energy to create a just and humanitarian society, instead of to worship.

Nuru, whose name means “Father of the Village,” recalls being beaten by his parents when he ate meat at a Christian friend’s house as a child.

Though Awra Amba could claim only 19 members when Nuru founded it, the thriving community has received international acclaim in recent years. It has also been the subject of several documentary films.

“I regard it as the model for the world community on how gender issues should be treated,” said EU Ambassador to Ethiopia Tim Clarke in a Christian Science Monitor report. “I have come across nothing else like it anywhere in Africa—and indeed the world. I am using it to inspire the work of my office here on gender mainstreaming and empowerment of women.”

“These people have developed their own values and we know all members observe these values voluntarily,” said Zelalem Getachew, a spokesperson for the 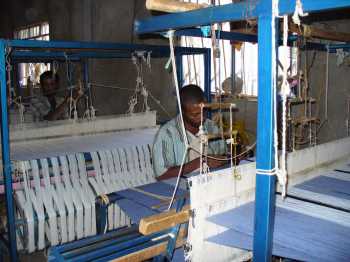 Though the commune’s social success is evident, it has had its share of the poverty that plagues surrounding rural villages. Because much of their forty-three acres is unfertile, community members cannot make a living by farming. Instead, they sell woven items made with both modern and traditional weaving machines. They also possess three donated grinding mills, which bring in additional income.

Weaving is typically associated with women and the lower class in Ethiopia, but men and women work together at Awra Amba’s plant. Nuru stresses the importance of manual labor and craft skills while ensuring that each member of the community learns to read and write as well, though he never did.

The residents hope to raise money to install a sewage system, pave the roads, and expand the community. In the meantime, anyone can take a tour.

“I was completely captivated by my visit to the community,” said Clarke.

In Ethiopia, one man’s model for a just society
Christian Science Monitor, August 21, 2007