Scientists are reintroducing Giant tortoises to the islands of the Galapagos in a dramatic conservation effort. 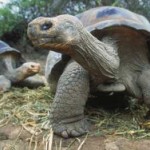 The reptiles—they can grow to over six feet long, weigh over 500 pounds and can live over 150 years—were nearly brought to extinction when sailors and pirates killed them for their oil and meat in the 18th and 19th centuries.

In the latest effort, 39 sterile tortoises were released onto the northern-most island of Pinta in early July.

This initial population was sterilized “because it isn’t appropriate that they reproduce, being the product themselves of crosses that don’t belong to the original tortoise subspecies of the Galapagos,” said biologist Washington Tapia of Galápagos National Park to Tierramerica.

If the population thrives, fertile Española animals will be introduced to the island.

“A team of park rangers, biologists, herpetologists, botanists and veterinarians from Galápagos National Park, the Houston Zoo and State University of New York’s College of Environmental Science and Forestry oversaw the release,” according to the report.

A student group with GPS monitoring will further follow their health and migration patterns.

Only 11 of the original 15 Galapagos tortoise species remain, but a successful effort of captive breeding has brought them back from the brink of extinction. Scientists told Tierramerica that there were between 5,000 and 10,000 tortoises on Pinta alone over 200 years ago.

The Pinta species was wiped out — save for one male, who has since been named Lonesome George because there are no more females with which he can mate. Lonesome George, who was found in 1971, now lives out his life at a reserve on the neighboring island of Santa Cruz at the Charles Darwin Foundation.

Darwin’s observations of various animals on the Galapagos Islands, including giant tortoises, led to his theory of natural selection and his “On the Origin of Species.” (According to Darwin’s journal, he and his team of sailors also ate salted tortoise meat during his voyages on the HMS Beagle.)

The conservation effort has been underway for over 30 years and has been very successful on other Galapagos islands. 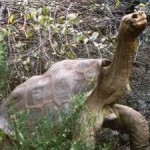 Before the 39 tortoises could be released on Pinta, over 40,000 invasive goats had to be killed. Just three goats released on the island in 1951 exploded into a population of over 40,000, destroying native vegetation. The final goat was killed in 2003, and native plant life has recuperated.

On the island of Española, conservation efforts have led to a thriving, reproducing population of over 1,500 tortoises, according to Guardian.co.uk.

“Tortoises have begun to play their role as ecosystem engineers,” said Tapia. “We can say with certainty that the ecological integrity of Española is being re-established.”

The Return of the Giant Tortoise
Tierramerica via Inter Press Service, July 7, 2010