The term “feminist” has been preceded by countless qualifiers since its debut in France in the late 1800’s, but leading up to the November 2010 midterm elections, it has been paired increasingly with a word many believe to be its antithesis: conservative. 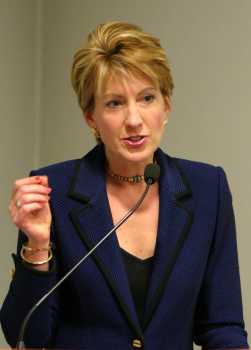 Carly Fiorina is a Senate candidate from Calif.

This sudden conservative female presence in politics represents what 2008 vice-presidential candidate Sarah Palin has dubbed as a “pro-woman, pro-life” movement.

“I kind of feel like the old mold—that a feminist cannot be pro-life—has never really been accurate,” explained Bay Area executive and Carly Fiorina supporter Darcy Linn, in a San Francisco Chronicle report. “So many Republican women I know are strong, opinionated, successful earners who have been encouraged to be successful on the corporate front.”

A News Real Blog blogger said, “Conservative women are strong, capable and are fed up at having faux feminists constantly claim that they speak for us as they strive to turn all women into perpetual victims, at the mercy of big strong daddy government.”

But skeptics maintain that these candidates’ ideologies are anything but “pro-woman.”

“If Carly (Fiorina) wants to describe herself as a pro-woman candidate, I’d say presiding over a company where 28,000 people lost their jobs, many of whom were women; working to limit the ability of women to make their own reproductive decisions; and appealing to those who support the idea that climate change is not a significant threat does not seems like a pro-woman position to me,” said pro-choice PAC EMILY’s List director Jen Bluestein.

Several political commentators and journalists have tried to define exactly what makes a “conservative feminist” earn that title.

A Times writer praised Palin in 2008 for creating an “explosion of a brand-new style of muscular American feminism. At her startling debut at the Republican convention, she was combining male and female qualities in ways that I have never seen before.”

Others have questioned a “feminist” ideology that encourages women to mimic men—at least in the professional arena.
“These women are part of a new wave of conservative feminism, which apparently views women’s advancement in the workplace and politics to be the most important tenet of actual feminism,” said blogger Tasha Fierce. “Basically, these conservative feminist leaders have decided that the advancement of women to the upper echelons of business — something they have already achieved — is what feminism should really be about.” 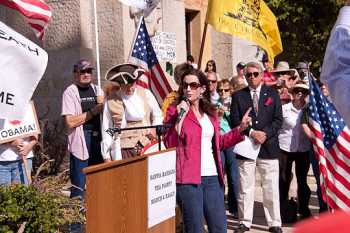 Women are leaders in the Tea Party

Many of the Republican women on November’s ballot have a background in business instead of politics. Whitman and Fiorina were both CEO’s.

While business and financial success are evidently integral to this movement, many of these women have said that family values and motherhood are also key principles.

In Slate Magazine, party spokeswoman Rebecca Wales described the Tea Party—whose leadership is dominated by women—as “a lot of mama bears worried about their families.”

Palin used a similar metaphor in her recent political ad Mama Grizzlies. In it, Palin, who recently endorsed Fiorina and Haley, says, “It seems like it’s kind of a mom awakening in the last year-and-a-half, where women are rising up and saying, ‘No, we’ve had enough already.’ Because moms kinda just know when something’s wrong.”

“When people say ‘pro-woman feminism,’ my suspicion is what they mean is ‘pro-traditional, feminine’ feminism,” said author Camille Hayes.

Other critics claim that conservative dismissal of feminism that “victimizes” women and the emphasis on corporate success contradicts this worried-mother rhetoric.

A Huffington Post writer reminded her readers that, though “conservative feminists” are currently in the spotlight, they do not necessarily share political beliefs with a majority of American women, and certainly do not mirror the country’s demographics. “If women made up 50% of elected officials, party leaders, and candidates, we would find them falling on all points of the political spectrum,” she said. “But women are so vastly underrepresented at all levels of office that prominent female figures are often thought to represent a dramatic trend or majority of women.”

Fierce agreed, “If you take a look at those calling themselves conservative feminists, the vast majority of them are white. Conservative feminism hearkens back to the days when more liberal feminists sought to marginalize women of color, lesbian women, and poor women.”

But a Jezebel writer said that, even though current female politicians may not represent the beliefs or demographics of the American female population as a whole, “Generally speaking, feminists are in favor of seeing more women in positions of power.”

One thought on “‘Conservative feminism’ trademark of election rhetoric”